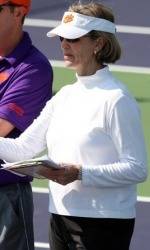 No. 14 Women’s Tennis Opens Season With a Pair of Matches this Week

CLEMSON, SC – The 14th-ranked women’s tennis team opens the dual match season this week on Friday at 3:00 pm as Florida International comes to the Hoke Sloan Indoor Tennis Center in Clemson. The Tigers have a quick turnaround, as they’ll play College of Charleston on Sunday at 11:00 am. Both matches are free to the public, and there is live scoring available at ClemsonTigers.com. This will be the first-ever meeting between Clemson and FIU, as both squads open their respective 2012 seasons. Clemson is 22-1 all-time against the Cougars, including a 7-0 win last season during the heart of ACC play. Head coach Romy Kölzer, and Yana Koroleva. Monika Kochanova is also eligible to compete after sitting out the 2010-11 school year. Clemson has four top-ten opponents on the schedule, and seven of the top 17 teams nationally hail from the ACC, including the Tigers. The Tigers will tune up for the 2012 ITA kickoff weekend on Jan. 28-29, where they’ll host the first two rounds of the ITA Team National Indoor Championships. The winner of the region will travel to Charlottesville, VA for the round of 16. The Tigers play five in a row at home before heading to Furman on Feb. 1.