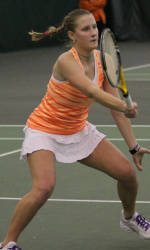 CLEMSON, SC – The 14th-ranked Clemson women’s tennis team will try to move to 3-0 when they play host to the Winthrop Eagles (3-1) in a mid-week dual match Wednesday at 2:30 pm at the Clemson Indoor Tennis Center. Clemson downed Florida International and the College of Charleston last weekend to open the season.

Clemson holds a 5-0 mark against the Eagles all-time, with the most recent meeting coming in the first round of the 2009 NCAA Tournament in Clemson.

Live scoring will be available for the event at Clemsontigers.com.

The Tigers powered through the first two matches largely with solid showing in singles play. Romy Kölzer were each undefeated last week, while Klara Vyskocilova and Monika Kochanova picked up wins against FIU.

In doubles, the eighth ranked duo of Josipa Bek and Keri Wong won, 8-1, in their only match together against FIU, before splitting against College of Charleston, in which Clemson claimed the doubles point on Bek’s win with Kölzer.

This will be Clemson’s final match before playing host to the 2012 ITA Kickoff Weekend, the first two rounds of the ITA Team National Indoor Championships. Clemson will play Purdue on Saturday, with the winner taking on the winner of Kansas State and Wake Forest.