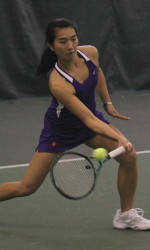 No. 14 Clemson To Play at Furman Wednesday

CLEMSON, SC – The 14th-ranked Clemson women’s tennis team will play at No. 74 Furman on Wednesday at 3:00 pm at the Mickel Tennis Center in Greenville, SC. Clemson (5-0) is 41-3 all-time against the Paladins (1-2), and have won nine consecutive meetings going back to a 2002 loss in Greenville. The match will have live scoring available at Clemsontigers.com.

The Tigers are off the a 5-0 start for the fourth straight season and ninth time in program history. Clemson advanced to the ITA Team National Indoor Championships for the fifth consecutive season with a pair of victories this past weekend.

Clemson and Furman have played one common opponent this season, as each has defeated Florida International in dual match play. Clemson won by a 6-1 margin, and Furman by a 4-3 edge in their respective matches.

The Tigers have won the doubles point in four of five matches this season, but have really shined in singles play, where they have a combined mark of 21-5 (.808) in singles play, including unblemished dual match marks from Wong (5-0) and freshman Romy Kölzer (4-0) and a combined 8-2 record from Vyskocilova and Ciolkowski.

The Tigers will play host to the Clemson Winter Indoor Classic this weekend, a flighted tournament which features the Tigers, Charleston Southern, Armstrong Atlantic, and Troy. Beatrice Gumulya will make her debut for Clemson during the weekend, as the Jakarta, Indonesia native has sat out the past six matches.