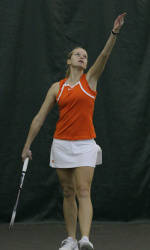 GREENVILLE, SC – The 14th-ranked Clemson women’s tennis team downed No. 74 Furman by a 7-0 count on Wednesday at the Mickel Tennis Center in Greenville, SC. Clemson (6-0) improved to 42-3 all-time against the Paladins (1-3) and won a tenth straight match in the series. Clemson won the doubles point for the fifth straight match, sweeping all three decisions, and then winning all six singles matches in straight sets. Romy Kölzer improved to 3-0 as a tandem this season as they defeated Margaret Boyette and Lauren Kline at flight two by an 8-6 margin. Finally, Ina Hadziselimovic for second on the school’s all-time list. Bek is first with 109 wins. Clemson followed the doubles with a strong singles effort, winning all six matches for the second time this season. The Tigers won each in straight sets, led by No. 65 Wong, who dispatched Katherine Oudin, 6-0, 6-1 at flight two. Wong is now 6-0 in the dual match season, and has won nine of her last ten overall. Vyskocilova finished shortly thereafter with a 6-2, 6-2 win at three singles against Michele Stanford. The 58th-ranked player in the nation is now 9-3 overall and 5-1 in dual match play. It was the 30th singles win of her career. Ciolkowski then clinched the match at three, her 5th win of the dual match season. Her 6-2, 7-6 decision over Margaret Boyette was her 10th of the season, and already the 63rd of her career. Bek then defeated Lauren Kline for the second time in the calendar year, winning 6-2, 6-4 over the Paladins’ top player. It was Bek’s 99th career singles win. She is trying to join Jody Trucks as the only two players in school history to win 100 singles and 100 doubles matches in a career, and she’ll get her opportunity this weekend at home in the Winter Classic. In the final two decisions of the day, Kölzer stayed undefeated (5-0)with a 6-2, 7-6 win at flight five, while Monika Kochanova continued her quietly strong play with a 6-0, 6-3 win at six singles. In total, Clemson’s singles play has continued to impress, and now has a 27-5 (.843) record in dual match singles. The Tigers will return to action in the Clemson Indoor Winter Classic from Friday to Sunday as they welcome in Charleston Southern, Armstrong Atlantic, and Troy in a flighted tournament. No. 14 Clemson (6-0) def. No. 74 Furman (1-3), 7-0Feb. 1, 2012 – Greenville, SC – Mickel Tennis CenterDoubles: