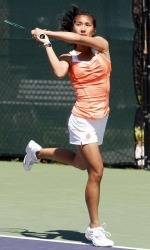 *Inclement weather has caused a delay in the match start times. The Tigers and Virginia Tech will begin play at approximately 6:00 PM.*

Updated scoring will be available at ClemsonTigers.com.

Clemson will close the regular season and open tournament play with the same opponent for the third consecutive season. Clemson defeated Virginia Tech on April 17, 7-0, to clinch the sixth seed. Clemson played and beat Virginia last season in both matches, and the Tigers split decisions against North Carolina in 2009.

The Tigers are 30-22 all-time in tournament play and have four tournament championships in school history, with the most recent coming in 2008. The Tigers knocked off the two top seeds to take the ACC crown. Clemson has won eight ACC Championships in its history, second-most of any league school.

Clemson has been the sixth seed only once previously, falling to third-seeded NC State in 1998.

The Tigers feature 2010 All-ACC honorees Josipa Bek and Keri Wong, who are also candidates for the 2011 team, which will be announced on Thursday.

Bek and Wong have each been terrific as juniors, as Bek is ranked 10th in the nation in singles, and Wong is up to 45th. As a duo, the pair are ranked fifth nationally in doubles, and were ranked No. 1 for four weeks earlier in the season. Wong finished the ACC season with an 8-3 mark in league singles play.

Sophomore Nelly Ciolkowski has moved her way back in to the rankings at 116th, as she has come on strong of late, winning three in a row on her way to a 22-13 mark this season so far. Freshman Klara Vyskocilova is ranked 122nd, and holds a 19-10 mark in her first season.

The winner will advance to play third-seeded Miami in the quarterfinals at 3:00 pm on Friday.