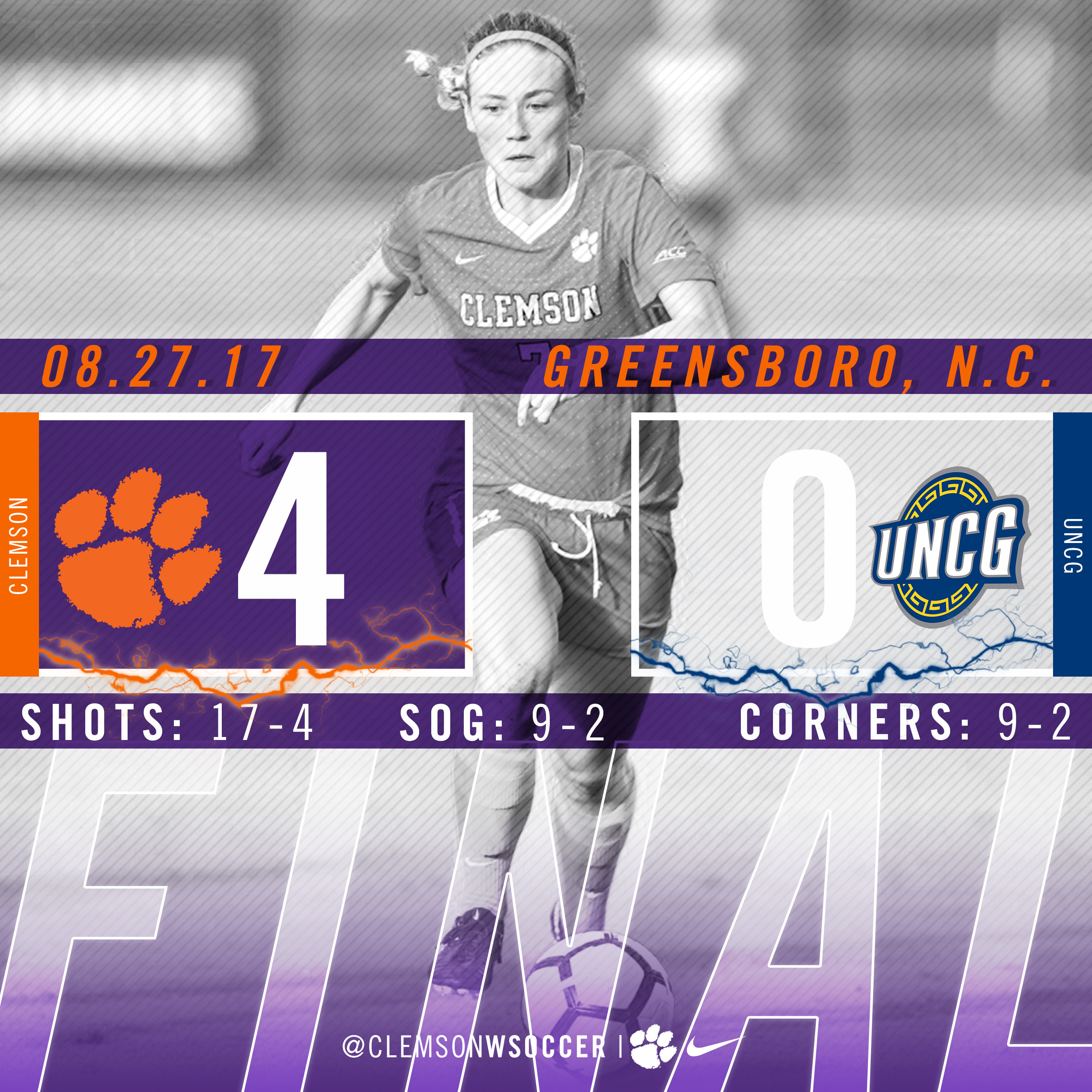 No. 13 Clemson Defeats UNCG in Homecoming for Eddie Radwanski

GREENSBORO, N.C. – Four different Tigers scored as the Clemson women’s soccer team defeated UNCG 4-0 on Sunday night at UNCG Soccer Stadium. With the win, Clemson improves to 4-0 overall, while the Spartans slip to 1-3.

After 42 minutes of play, Sam Staab put the ball in play on a corner kick, finding Mackenzie Smith who headed it backward to find the foot of Patrice DiPasquale. DiPasquale’s shot was blocked and deflected over to senior Jeni Erickson who buried it away, giving Clemson a 1-0 lead heading into halftime and her first goal of the season.

In the 55th minute, Jenna Polonsky scored from thirty yards out in deep midfield, to increase the lead to 2-0 with her fourth goal of the season. One minute later, senior Shannon Horgan sent a cross from the left wing to junior Miranda Weslake, who headed the ball into the bottom left corner, putting the Tigers up 3-0.  Less than sixty seconds later, the Spartans committed a foul in the box, setting up a penalty kick for Horgan, who converted for her first goal of the season.

For the match, the Tigers outshot UNCG 17-4, and 9-2 in shots on goal. Clemson took nine corner kicks, converting on one of them, while the Spartans had just two. Sophomores Sandy MacIver and Melanie Stiles split time in goal in the match, each with one save.

Prior to arriving at Clemson, Eddie Radwanski spent 10 seasons as the head coach at UNCG, where he amassed a 139-65-13 record and led the Spartans to five NCAA tournament appearances during his tenure. In his time at UNCG as a player, he was a two-time All-American and captain of the school’s NCAA Division III men’s soccer national championship teams in 1982 and 1983.  In 2000, he was inducted into the UNC Greensboro Hall of Fame. Sunday’s match was his first time returning to UNCG Soccer Stadium since taking over the program at Clemson.

The Tigers return to action Friday, Sept. 1 at 5 p.m. as they host VCU at Historic Riggs Field.