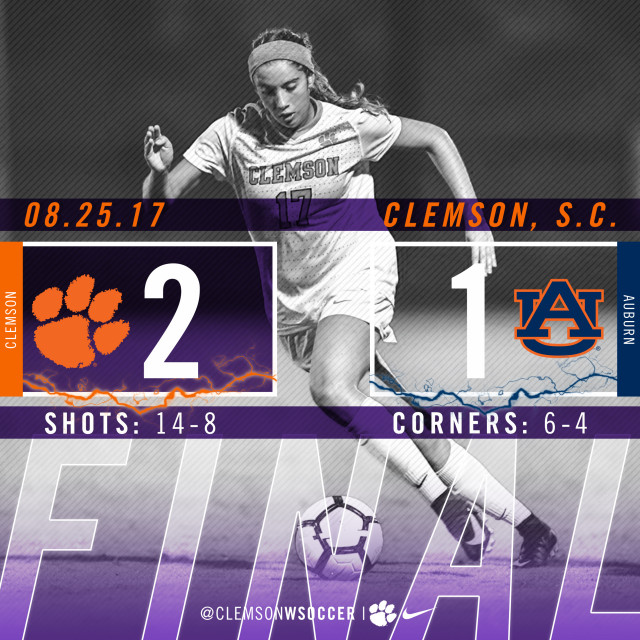 CLEMSON, S.C. – Mariana Speckmaier scored the game winning goal in a 2-1 double-overtime victory over the 20th-ranked Auburn Tigers on Friday night at Historic Riggs Field. With the win, Clemson improves to 3-0 overall, while Auburn slips to 1-1-1.

In the 17th minute, graduate Jenna Polonsky scored to take a 1-0 lead with her third goal of the season. Sophomore Julie Mackin lofted in a cross that found the foot of Polonsky to give the Tigers a 1-0 advantage. After a few more opportunities Clemson took a 1-0 lead into halftime.

Bri Folds of Auburn scored in the 54th minute, with a chip shot over Sandy MacIver to tie the match at 1-1. Neither team found the back of the net for the remainder of regulation, forcing overtime.

In the first overtime neither was able to find the back of the net, forcing a second sudden-death overtime. In the 102nd minute, Sam Staab took a free kick from midfield that was driven into the box that was then flicked on by Jeni Erickson only to find the foot of Speckmaier who put the game away. The goal marked Speckmaier’s fourth goal of the season, while Staab and Erickson earned their first assists of 2017.

For the match, the Tigers outshot Auburn 14-8, and 5-3 in shots on goal. Sophomore Sandy MacIver posted two saves in her 2017 debut for the Tigers.

The Tigers return to action on Sunday, Aug. 25 as they head to UNC Greensboro. The match is set to start at 6 p.m.

“It’s fantastic to open at home with a big win at such a special place like Historic Riggs Field. The atmosphere was electric and we wanted to give the fans something to cheer about. We really got off to a great start scoring that goal and we were in control of the match most of the time.

“Our overall team defending has gotten better each game. Our back line played extremely well tonight. Julie Mackin was phenomenal today, and that back line helped settle us down and kept us in the game. Give Auburn credit, they are a good team. We tested each other and the made us work hard. They very well could have had the result tonight.

“I had a few words of encouragement with Mariana as we came back out for overtime, and she seemed to listen and had a bit more energy. I’m happy for her. Sam had a great ball into the box, Jeni got on the end of it in the air and Mariana was the poacher that she was supposed to be.”