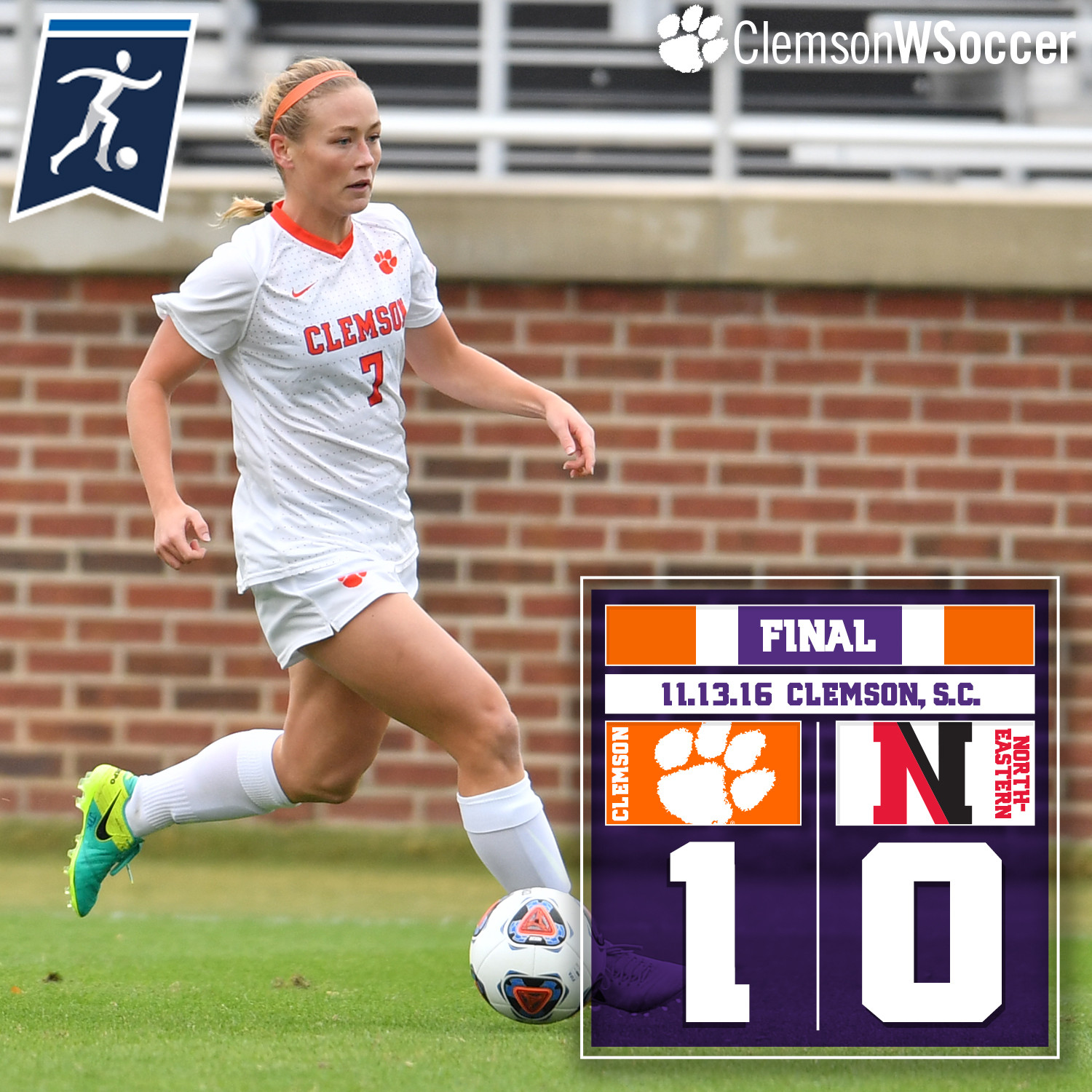 No. 12 Tigers Advance to NCAA Second Round with 1-0 Win Over Northeastern Sunday

CLEMSON, S.C. – One goal by junior Shannon Horgan was all the 12th-ranked Tigers needed to advance in the NCAA Tournament on Sunday afternoon, as Clemson picked up a 1-0 victory over Northeastern at Historic Riggs Field in the first round of the national tournament. With the win, the Tigers improved to 14-4-3 overall, and remained unbeaten at Riggs with a 10-0-2 record in home matches, while the Huskies’ season ended at 14-7-1.

Clemson controlled possession in the first half, outshooting the Huskies 9-5 and earning five corner kicks to Northeastern’s zero. The Tigers continued the pressure in the second half, and finally broke through in the 61st minute of play. Senior Emily Byorth dribbled the ball along the left side of the field, sending a pass backwards to junior Shannon Horgan. Horgan settled the ball and launched a shot from 28 yards over the head of the Huskies’ diving keeper, scoring her fourth goal of the year.

The Tigers generated a few more chances in the final 30 minutes of the second half, but Horgan’s shot was the only one to find the back of the net. Defensively, sophomore Sam Staab and seniors Claire Wagner, Emily Byorth and Gabby Byorth, kept the Huskies from being able to create any solid chances. Senior Kailen Sheridan tallied two saves, the win and the clean sheet, her fifth solo shutout of the season.

This is the second consecutive NCAA Second Round berth for the Tigers under sixth-year Head Coach Eddie Radwanski. Clemson is now 2-0-2 in the national tournament under Radwanski, and the program is now 8-6-3 in NCAA first-round matches.

With the win, the Tigers will now head to Chapel Hill, N.C., where the Tar Heels host the NCAA Second and Third Rounds on Nov. 18-20. Clemson faces Arkansas in the Second Round. The Razorbacks (18-5) defeated Memphis 2-1 in their first-round contest.