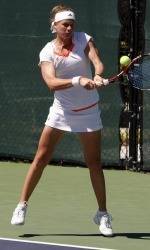 Clemson is coming off a 5-2 loss at the hands of No. 9 Baylor on Wednesday, and the Blue Devils and Tar Heels will be the seventh and eighth top-ten teams Clemson has played this season, respectively.

Clemson’s Josipa Bek will be the highest ranked player in both singles and doubles, as she will take her No. 10 ranking and eight-match winning streak to the conference’s top two teams. She and Keri Wong are ranked No. 1 in the nation in doubles as well.

Freshman Masha Belaya has been playing solid tennis for the Tigers as well, and she has won seven straight overall.

The Tigers knocked off then-No. 7 Duke last season by a 4-3 margin in Clemson. The Tigers dropped the doubles point, but got wins from Bek, Wong, Laurianne Henry to clinch the win.

The second-ranked Tar Heels defeated the Tigers in their only meeting last season, taking the doubles points and winning three of six singles matches for the 4-3 win.

After the matches in North Carolina, Clemson will have just two left before the ACC Tournament on April 21-24 in Cary, NC. Clemson hosts Virginia on April 16 and Virginia Tech on April 17 for senior day.