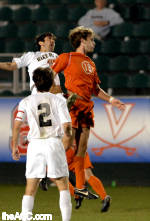 CLEMSON, SC– Cody Arnoux scored one goal and had one assist in leading number-one ranked Wake Forest to a 3-1 win over Clemson in the quarterfinal round of the ACC Men’s Soccer Tournament at Cary, NC Wednesday night. The Deacons scored two goals in the final two minutes of play.

Wake Forest, ranked number one in the country and second seed in the tournament improves to 16-1-2 overall and Clemson fall to 7-11-1.

The Deacons scored first at the 36:51 mark. Evan Brown and Jamie Franks combined to send a pass to Arnoux who scored his 13th goal of the season.

Clemson tied the score at the 71:47 mark when David Bell crossed the ball to Michael Brooks. Brooks sent a shot into the nets for his fifth goal of the season.

Wake Forest scored the game winner with two minutes left to go in regulation. Julian Valentin scored his second goal of the season with an assist by Sam Cronin.

The Deacons scored 1:02 later, :58 seconds left to go in the game, as Arnoux sent a pass to Marcus Tracy. Tracy scored his second goal of the year to give the Deacons a 3-1 win.

“I am proud of the effort and the way we fought, but we made some silly mistakes at the end,” said Clemson Head Coach Trevor Adair. “It was typical of our entire season. I thought we competed hard and gave ourselves a chance to win. I am disappointed that we had let downs toward the end of the match and did not take advantage of our hard work. I hope our under classmen learned from this tonight.”