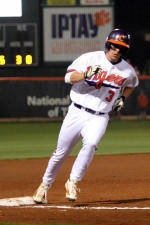 Ninth-ranked Clemson scored six runs in the first two innings and held on to defeat #19 Georgia 10-7 in front of 5,426 fans at Doug Kingsmore Stadium Wednesday. The two teams combined for 17 runs and 25 hits in the game as the Tigers improved to 17-7, while the Bulldogs dropped to 18-6. Georgia defeated Clemson in Athens, GA 12-11 in 10 innings on Tuesday, meaning the teams combined for 40 runs in the two-game set.

Herman Demmink was 3-for-4 for Clemson with a home run, three RBIs, and two runs scored. Brad Chalk, Tyler Colvin, Andy D’Alessio, and Marquez Smith each had two hits apiece for the Tigers. Jason Jacobs was 3-for-4 with a home run and two runs scored for Georgia. Joey Side, Bobby Felmy, Matt Olson, and Matthew Dunn each added two hits for the Bulldogs.

P.J. Zocchi (2-0) struck out a career-high six batters and allowed six runs on eight hits in 5.0 innings pitched to earn the win for Clemson. Drew Fiorenza pitched a career-high 4.0 innings, allowing one run on four hits to pick his first save of the season, and second of his career. The Atlanta, GA native struck out three and walked one. Starter Nathan Moreau (3-1) allowed five runs (four earned) in 0.1 innings pitched and suffered the loss for Georgia.

Demmink walked to lead off the first and moved to second on a wild pitch. Chalk followed with a bunt single down the third-base line, moving Demmink to third. Taylor Harbin then singled through the left side to score Demmink, and Colvin walked to load the bases. D’Alessio then hit a three-run double to right to make it 4-0. D’Alessio flied out with the bases loaded in the eight, and ended the night 1-for-2 in that situation, as he moved to 10-for-19 (.526) with 33 RBIs in his career with the bases loaded. Smith then hit a routine grounder to short, but reached on a throwing error by Gordon Beckham, allowing D’Alessio to score.

Georgia answered with three runs in the second. Matt Robbins walked to lead off the inning, and Jacobs followed with a single up the middle. One out and a wild pitch later, Olson singled through the right side to score Robbins. With two outs, Dunn singled up the middle to score Jacobs. Olson scored the third run of the inning after two more wild pitches.

Demmink led off the second with a solo homer down the right-field line, his second long ball of the season.

Zocchi retired the first two batters of the fourth, but Olson tripled to right center, and Ryan Peisel followed with a two-run home run to left, cutting the Tiger lead to 6-5. It was Peisel’s second homer of the season.

Felmy extended his hitting streak to 13 games with a two-out infield single in the fifth. Chalk then saved at least one run with a leaping catch up against the fence in center to rob Robbins of a hit.

Colvin singled to begin the fifth, stole second, and went to third when Beckham dropped the ball. D’Alessio then hit a sacrifice fly down the left-field line to score Colvin. Smith doubled to left-center with one out, and Stan Widmann walked with two outs. Adrian Casanova was hit by a pitch to load the bases. Demmink then hit a two-run single to right on a 3-2 changeup to score Smith and Widmann.

Jacobs homered to left to lead off the sixth, his second of the season, which ended the night for Zocchi. Dunn hit an RBI double with two outs to score Olson, who reached on a fielder’s choice.

Smith doubled to left-center with one out in the seventh, and scored on a two-out single up the middle by Widmann.

The Tigers loaded the bases with one out in the eight but could not score. Demmink singled through the left side to begin the inning, and Chalk followed with a single to left on an 0-2 pitch. A sacrifice bunt by Harbin moved runners to second and third, and Colvin was intentionally walked. D’Alessio flew out to center, and Demmink was thrown out attempting to return to third after the relay throw was cut off by Morris.

Clemson returns to ACC action Friday night when it travels to Coral Gables, FL to take on #11 Miami for the first game of a three-game series at 7:00 PM. All three games of the series will be televised live by CSS.