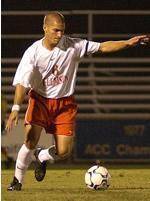 FOXBOROUGH, Mass. – The New England Revolution announced today that defender Chase Hilgenbrinck has signed a contract with Major League Soccer to play for the club. Per league and team policies, terms of the deal were not released. Hilgenbrinck will occupy one of the team’s 18 senior roster slots.

“Chase will provide us experience and depth in the back,” Revolution Director of Soccer Michael Burns said. “We’re fortunate to be able to add a proven defender just before the start of the season.”

Hilgenbrinck played his college soccer at Clemson, where he started 58 of the 74 games in which he played during his four years. He scored three goals and added 10 assists, and was a teammate of current Revs goalkeeper Doug Warren.

The Revolution opens the 2008 season on Saturday, March 29, when the team hosts the Houston Dynamo at Gillette Stadium in a rematch of MLS Cup 2007.