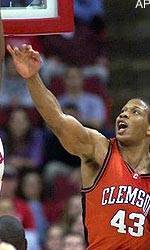 Clemson (10-14, 1-10 Atlantic Coast Conference) has lost eight in a row and 10 of 11. It is the Tigers’ longest losing streak since dropping nine straight in 1971-72. The streak ties for eighth longest in school history.

Clemson’s Will Solomon, the ACC’s scoring leader, had his streak of scoring in double figures end at 52 games. He took just seven shots – two in the second half – and finished with 7 points.

Solomon has shot just 30 percent in the last five games and averaged five turnovers. He had four turnovers against N.C. State.

N.C. State led 46-28 at halftime after closing the first half on a 16-4 run, including 10-0 in the final three minutes. Clifford Crawford ended the half with a pullup jumper and a breakaway layup off a steal in the final 15 seconds.

It got worse in the second half as the Wolfpack opened with a 23-9 run, and built the lead to 79-39 midway through.

Clemson hit 7 of 23 shots in the second half and shot 35 percent overall.

Chris Hobbs led the Tigers with 15 points, but had six turnovers.