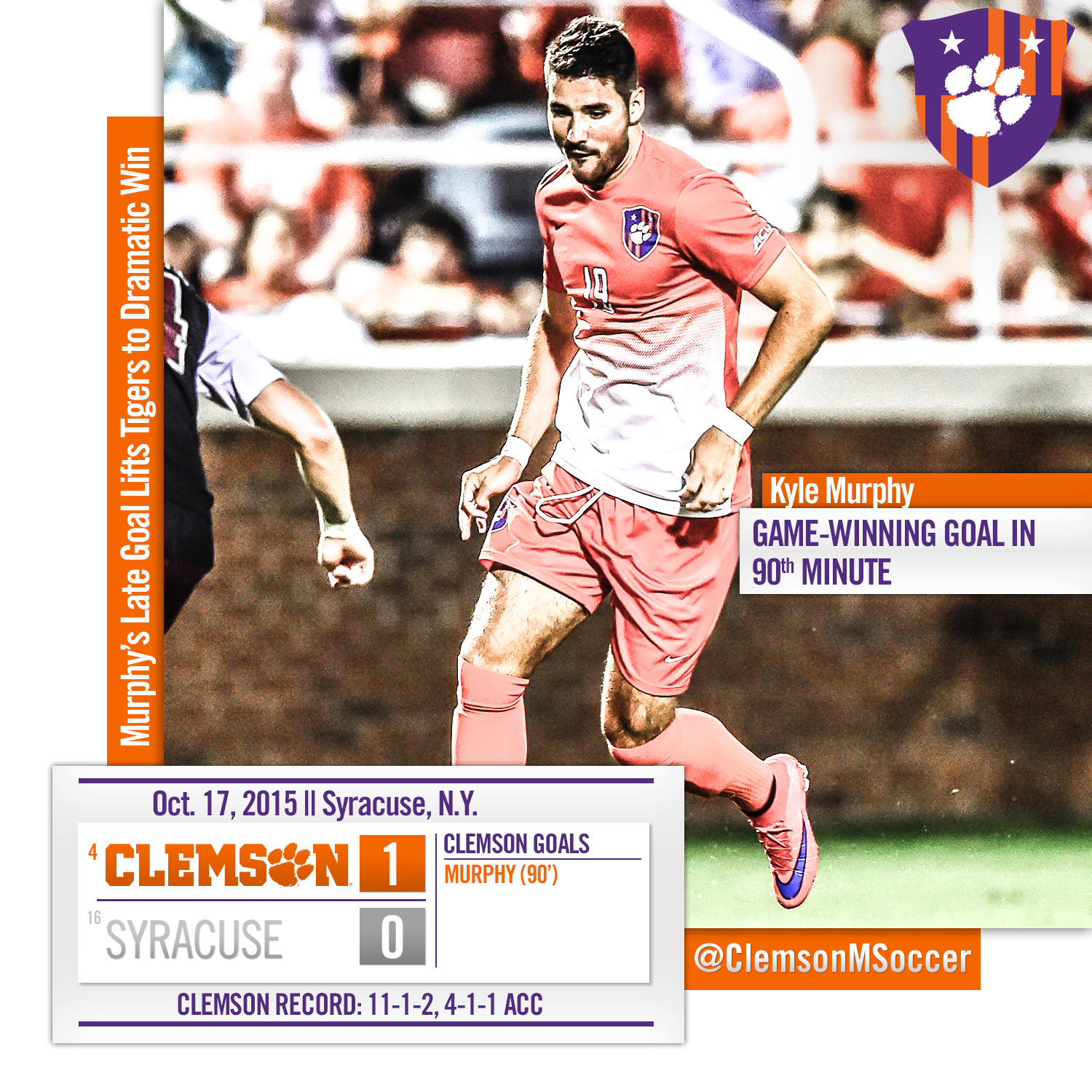 Murphy?s Late Goal Lifts No. 4 Tigers to Dramatic Win at No. 16 Syracuse

SYRACUSE, N.Y. – Redshirt senior and Red Hook, N.Y. native Kyle Murphy scored the game’s lone goal with just 51 seconds left in regulation to give Clemson a 1-0 victory on the road at Syracuse on Saturday night. With the win, the fourth-ranked Tigers improved to 11-1-2 overall, and 4-1-1 in the Atlantic Coast Conference, while the No. 16 Orange fell to 9-4-1 (2-3-1 ACC).

“It was a classic ACC match with a fairytale ending for us,” said Head Coach Mike Noonan. “Kyle Murphy, a fifth-year senior who is from upstate New York, had a great game-winner. The team was tough and resilient again, and I’m very pleased.”

After 89 scoreless minutes of soccer, Murphy stripped the ball from a Syracuse player just inside half field and dribbled ahead 60 yards to finish the shot from 16 yards past the Orange keeper. The goal was the fifth of the season for Murphy, who is now tied for second on the team in scoring with 12 points.

Redshirt junior keeper Andrew Tarbell added four saves in the victory, recording his sixth clean sheet of the season. Tarbell continues to rank in the top three among goalkeepers in the ACC in saves (46), goals allowed (9) and solo shutouts (6).

For the game, the Tigers and the Orange each took eight shots, while Syracuse had an 11-3 advantage in corner kicks. There were 29 fouls called in the contest, 17 on Clemson and 12 on Syracuse.

The Tigers now return home for two games. They host Georgia Southern on Tuesday, Oct. 20 at 7 p.m. and Boston College comes to town on Friday, Oct. 23. Friday’s match against the Eagles is Clemson’s final regular season home contest, and the Tigers will honor their seniors during a pregame ceremony.