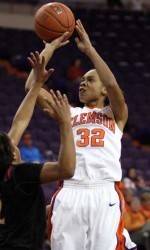 CLEMSON, SC – Christie Rogers, who was hired as an assistant coach at Winthrop University.

“I am thrilled to have Morganne back at Clemson and as a member of our staff,” said Coleman, who is entering her second season. “She has a love and passion for this University that will prove to be invaluable.”

“It’s a great feeling to be back home; Clemson is home for me, and I am very excited,” said Campbell. “I realized that I missed basketball and that I still want to be involved with it. I’m looking forward to seeing where this program can go. With the new coaching staff, this program will do well. Coach Coleman recruited me and I played for her as a freshman, and I’ve heard a lot about the other assistants.”

Campbell has spent the past year as an intern for the Community Relations department with the Orange Bowl Committee in Miami, FL There, she helped organize several big events, including the “Big Buddy Dinner” and the “Field of Dreams Scholarship.” She also helped plan many community service projects leading up to the events.

Campbell, who graduated with a degree in Health Science in 2010 from Clemson, will return to graduate school to pursue a degree in Youth Leadership Development.

“I know a lot about basketball, and I have learned a lot as a player and I can bring a lot to the table for current student-athletes,” said Campbell. “I understand what it takes to be successful, and I can help the players athletically and academically.”

Campbell played in 98 games in her career for Clemson as a guard, starting 36 contests, including 28 as a sophomore, when she averaged 8.5 points and 3.4 rebounds per game. She finished her career with 468 points, 196 rebounds, and 94 steals in 1,781 minutes for the Lady Tigers.

Coleman was an assistant coach with the Lady Tigers when Campbell was a freshman, and helped to recruit the Fairburn, GA native to Clemson.

As a graduate assistant, Campbell will be responsible for aiding the staff in planning recruiting trips, assisting in video scouting, and various responsibilities related to the development of the student-athletes.