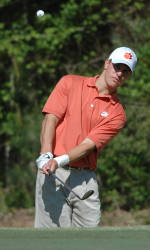 Clemson, SC – Clemson senior Phillip Mollica shot a an eight-under par 136 score for two rounds at the Magnolia Course at Pinewild Country Club in Pinehurst, NC over Monday and Tuesday and qualified for the 2008 United States Amateur. The US Amateur will be played from August 18-24 at Pinehurst #2 and #4 in Pinehurst, NC.

Mollica tied for medalist honors for the 36-hole qualifier with scores of 65-71. He tied for first with Paul Woodbury of Lake City, SC and J.C. Bass of Fairview, NC.

Mollica has played well at Pinehurst #2 over the years. Last summer he became the first Clemson golfer to win the North-South Amateur at Pinehurst #2. The native of Anderson, SC was a key to Clemson’s fifth place NCAA Tournament finish this past May and he was named to the Ping Golf Coaches Association All-Region team.

Mollica is the second member of the Clemson team to qualify for the US Amateur so far. Junior Kyle Stanley, who won the Southern Amateur two weeks ago, was exempt from qualifying after he was selected to the 2007 Walker Cup team.