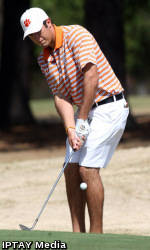 CLEMSON, SC – Clemson junior Corbin Mills has been named to the United States Palmer Cup team. The Palmer Cup is an annual Ryder Cup-style competition between college age golfers from the United States and Europe. This year’s Palmer Cup will be held June 28-30 in Newcastle, Northern Ireland at Royal County Down Golf Club.

“I am very honored to coach the caliber of players on this team,” said Gregory. “We will be taking a team to Europe that has past Palmer Cup and Walker Cup experience, which will be a huge asset. We greatly look forward to the opportunity to bring the Cup back home to the U.S.”

The United States has an 8-6-1 lead in the series, including victories each of the last two years.

Mills will be the first Clemson golfer to play in the Palmer Cup since the summer of 2004 when Jack Ferguson was a member of the United States team that was coached by Clemson Head Coach Larry Penley.

Mills will take part in the Palmer Cup nearly a full month after the conclusion of the NCAA Tournament. So far this year he has a 70.96 stroke average, on pace to be the fifth best in Clemson history. He is currently ranked as the fifth best United States amateur.