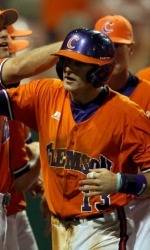 Brad Miller hit a three-run homer in the first inning and Justin Sarratt tossed 6.0 solid innings to lead Clemson to a 5-2 victory over Georgia in front of 2,297 fans at Foley Field on Wednesday night. The Tigers, who won the home-and-home season series 2-0, won their fifth game in a row and improved to 23-13 overall. The Bulldogs dropped to 19-19 overall.

Miller’s first home run of the year in the first inning was all the scoring the Tigers would need, as Sarratt and four other Tiger pitchers combined to limit the Bulldogs to nine hits, two runs (one earned), and no walks with seven strikeouts.

Sarratt (3-1) pitched 6.0 innings, allowing six hits, one run, and no walks with three strikeouts to earn the win. Scott Weismann combined to pitch the final 3.0 innings to close out the game. Weismann struck out the only batter he faced to record his first save of the season.

After the first two Tigers were retired in the top of the first inning, Jeff Schaus and Richie Shaffer both drew walks. Miller then belted an opposite-field, three-run homer to left-center.

In the bottom of the first inning, Levi Hyams led off with a double down the right-field line and advanced to third on Conor Welton’s single through the right side. Kyle Farmer then lofted a sacrifice fly to center to score Hyams.

After neither team dented the scoreboard during the next five innings, the Tigers added to their lead in the seventh inning. Chris Epps walked. Two batters later, John Hinson lined a two-out single to left-center to score Kieboom. It also extended Hinson’s hitting streak to 10 games.

The Bulldogs cut into Clemson’s lead in the eighth inning thanks to a Tiger error. Welton grounded a one-out single through the left side, moved to second on a wild pitch, and advanced to third on Farmer’s groundout. Zach Cone then hit a two-out grounder off the mound. Miller booted the ball, allowing Welton to score. It broke Clemson’s 10-game streak without a fielding error and snapped Miller’s streak of consecutive chances without an error at 56.

The Tigers responded with an insurance run in the top of the ninth inning. Epps led off with a single up the middle, advanced to second on Jason Stolz’s sacrifice bunt, and moved to third on Hinson’s groundout to second. Epps then scored with two outs on a wild pitch to give Clemson a 5-2 lead.

In the bottom of the ninth inning, Peter Verdin grounded a one-out single off the glove of Miller and Curt Powell struck out swinging on a 3-2 pitch for out #2. The Tigers called on Weismann to take the mound and he struck out pinch-hitter Austin Wheeler to end the game.

Miller went 2-for-3 with a three-run homer, walk, and steal to lead the Tigers, who totaled eight hits in the game. Will Lamb added a single to up his hitting streak to 11 games. Shaffer was hitless, as his 11-game hitting streak came to an end. However, Shaffer scored a run, the 12th game in a row he touched home plate for the Tigers.

Welton went 3-for-4 with a run to pace the Bulldogs, who amassed nine hits in the contest. Farmer extended his hitting streak to 16 games as well.

Clemson will return home to face Wake Forest in a three-game series at Doug Kingsmore Stadium starting Friday at 6:30 PM.