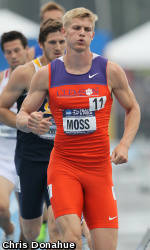 CLEMSON, SC – Clemson graduate Miller Moss earned the bronze medal in the decathlon this week to highlight the efforts of past and present Tiger track & field athletes at the USA Junior/Senior Championships in Eugene, OR.

Michaylin Golladay, who ended her collegiate career as an All-American in the 100 hurdles two weeks ago, placed fourth in her semifinal with a lifetime-best 12.82. The school record-holder in the event finished 10th overall, as she just missed qualifying for the final on Sunday. Brianna Rollins ran for just the second time since the ACC Championships in late April this week. The red-shirt freshman from Miami, FL clocked a personal best 12.88 in the prelims to move on to the semifinals, where she had a time of 13.10.

Spencer Adams made it to the semifinals of the men’s 110 hurdles. He ran a personal best 13.51 in the preliminary round, and then trumped that time in the semis with a 13.48. He was 13th overall in the semifinals.

Alyssa Kulik and Kim Ruck represented the Tiger distance program in the senior nationals. Kulik, the NCAA fourth-place finisher in the steeplechase, was 19th at the USA Championships with a time of 10:07.93. Ruck ran in the 10K and was 23rd posting a time of 33:54.64.

Former Clemson athletes Travis Padgett and Shawn Crawford competed professionally this week. Padgett, running for adidas, had one of the top seed times (9.97) in the men’s 100 dash en route to qualifying for the final. The former NCAA indoor champion was a late scratch in the final, though. Crawford, a Nike athlete, qualified for the final in the 200-meter dash and came away with a sixth-place finish (20.39). Crawford had a time of 20.24 in the preliminary round.

April Sinkler was the lone Clemson female to compete in a senior-level field event this week. She hit a mark of 20’10.5″ and finished 13th in the long jump.

Bridgette Owens was Clemson’s top performer at the USA Junior Championships. She finished runner-up in the women’s 100 hurdles, with a time of 13.46 in the final. She improved tremendously on that time (13.15) in the prelims for the senior nationals, but did not advance to the semifinals in that session. By virtue of finishing second, Owens earned an invitation to the Pan American Junior Championships, which will be held July 22-24 in Miramar, FL.

Ty McCormack was fourth in the junior men’s 3000-meter steeplechase. The freshman from Gainesville, GA posted a time of 9:13.57. Alyssa Henshaw was sixth in the women’s steeple amongst junior-level athletes.

Aaron Ramirez and Lisa Girard competed in the men’s and women’s junior 1500 meters, respectively. Ramirez had a time of 3:59.90 and was 17th in the prelims. Girard ran well and crossed the finish line with a time of 4:37.79. She was 13th overall, missing the final by a mere one spot.

Lauren Terstappen and Christy Gasparino both tied for fifth place in the junior women’s pole vault. Both freshmen athletes cleared the opening bar at 12’5.5″, but fell short in three tries at the next progressive height.

Thor Serafenas was seventh in the men’s hammer throw, where the athletes utilized the junior weight of five kilograms, one less than the collegiate hammer. Serafenas, a native of Maryland, had a top throw of 193’9″.