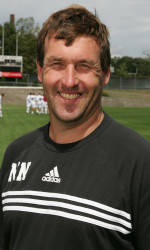 Noonan becomes the program’s fifth coach in the 75-year history of Clemson Soccer. The Clemson program has won National Championships in 1984 and 1987 and has won 13 Atlantic Coast Conference Championships.

“Clemson has a lot of history and success in collegiate soccer and we look forward to adding on to that success in the future,” said Noonan. “My family and I are excited about coming to Clemson and joining the Tiger family. To leave a place like Brown, it had to be a special opportunity, and Clemson was this special opportunity.

“I want to thank Terry Don Phillips and Kyle Young for entrusting me with the leadership of the Clemson Men’s Soccer program. I was very impressed with both of them as gentlemen and appreciate the opportunity immensely.”

Head Coach Mike Noonan comes to Clemson from Brown University of the Ivy League. In 2009, the Bears finished with an 11-3-5 record overall and advanced to the NCAA Tournament’s second round. He took Brown to the NCAAs four of the last five years, including to at least the second round of the tournament six different years. He guided Brown to the Elite Eight of the NCAA Tournament in 1995 and 2000.

Noonan has proven to be among the nation’s outstanding coaches, compiling an impressive 160-77-31 record in 15 years at Brown. He has a 224-116-1 overall mark in his 21 seasons as a collegiate head coach. He also coached at Wheaton College and the University of New Hampshire.

Ten of Noonan’s players have been selected in the annual Major League Soccer draft. All three members of Noonan’s class of 2005 signed contracts with the MLS at the conclusion of their Brown careers.   Noonan’s 1995 team set a school record for victories with a 16-4 record and reached a high of number-three in the nation at one points, the highest ranking in Brown history.

In 1997, the soccer program won the Ivy League title, earned a berth in the NCAA Playoffs, thanks to an 11-6-1 overall record, including a 7-0-1 mark over the last eight games.

In 1998, Noonan’s team finished undefeated in Ivy play, shutting out six of seven league opponents en route to a second consecutive league title and an NCAA Tournament appearance. Noonan’s defense allowed the fewest goals (2) in Ivy League play in Brown men’s soccer history, and became the first Brown team to go undefeated in the Ivies since 1976.

In 1999, the Bears finished second in the Ivy League and earned an at-large bid into the NCAA Tournament. Brown recorded its first NCAA opening round victory since 1995 with a 2-1 overtime win against Rhode Island on Stevenson Field.

In 2000, Noonan led Brown to its fourth NCAA Tournament berth in as many years, as Brown became the first team in 20 years to finish a perfect 7-0-0 mark in Ivy play. The Bears qualified for the NCAA Quarterfinals for the first time since 1995, defeating Vermont 2-0 and Duke 1-0 before losing to eventual national champion UCONN by a goal in the third round.

In 2001, the Bears earned a share of their second consecutive Ivy League title by posting a 5-1-1 league mark.

In 2003, Noonan put Brown back on the map, as it retained a national ranking throughout the entire season, and advanced to the NCAA Tournament for the sixth time in his career. The Bears went undefeated in Ivy play, posting a 6-0-1 record en route to the League Title. In addition, Noonan was named the New England Division I Coach of the Year.

In 2004, Brown finished in a tie for second in the league standings before returning to its place atop the Ivy League in 2005, earning its eighth Ivy Title in the last 12 years. The 2005 team also reached the second round of the NCAAs before it lost to eventual National Champion Maryland. In 2006, the Bears received an At-Large bid into the NCAA Tournament and reached the second-round for the second straight year. They defeated Adelphi at home, but lost to #1 seed Duke in the second round.

Brown closed out the 2007 regular season with a 15-2-1 overall record, including a perfect 7-0-0 mark in the Ivy League. It was the second time in seven years (2000, 2007) one of Noonan’s teams had achieved an unblemished Ivy record.   The 2007 squad earned the program’s 19th league title, and an automatic bid with a first-round bye to the Division I NCAA Tournament. The sixth-seeded Bears featured five players on the First Team All-Ivy, including one who was a unanimous selection, and a sixth player who made the second team. Brown also swept the Player of the Year and Rookie of the Year awards for the first time in Brown soccer history.

Prior to his arrival at Brown, Noonan led the University of New Hampshire to an NCAA Tournament berth in 1994 for the first time in the school’s history, ironically losing to Brown in the first round in a double overtime match. His Wildcats finished with a 15-5-2 record in 1994, playing 11 matches against top 20 teams, while setting a school record for victories. New Hampshire also captured the North Atlantic Conference’s regular season championship that year.

Noonan compiled a 48-23-9 record in four years as head coach at New Hampshire and was the winningest coach in Wildcat history when he left for the position at Brown. He was the 1993 New England Coach of the Year, and in 1992 was named the North Atlantic Conference Coach of the Year.

A 1983 graduate of Middlebury College, where he was a four-year starter and two-time first team All-American, Noonan embarked on a professional playing career in Sweden before returning to the United States to play for both the MISL and the AISA. He was voted to the AISA All-Star team in 1985. Noonan, 47, currently holds a UEFA “A” license from the English FA and an “A” license from the United States Soccer Federation as well. He is also a National Staff Coach for the National Soccer Coaches Association.

Mike is married to the former Deb Belcher. They have two daughters, Caleigh and Meghan.