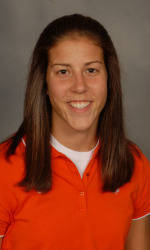 Nance, a senior from Simpsonville, S. C., who is majoring in Language and International Trade, is a repeat selection to the All-ACC Academic Rowing team, having been chosen to the 2008 squad and was a first-team All-ACC selection this year after helping to lead her boat and team to its first-ever Atlantic Coast Conference Rowing Championship. Nance rowed on the Tigers’ First Varsity Eight boat which defeated Virginia for the first time in the 10-year history of the ACC’s Rowing Championships. Nance was also honored as a national scholar-athlete by the Collegiate Rowing Coaches Association (CRCA). Named to the ACC’s Crew of the Year, she is also a two-time member of the ACC’s Academic Honor Roll.

A total of two All-Americans, 12 CRCA Scholar-Athletes and three CRCA All-Region honorees are featured on the 2009 All-ACC Academic Rowing Team. The 34 rowers were selected from a pool of 117 nominees from the ACC’s six schools who sponsor rowing–Boston College, Clemson, Duke, Miami, North Carolina and Virginia–an impressive average of almost 20 nominees per school.

To be nominated for the ACC All-Academic team, student-athletes must have recorded a minimum of a 3.0 grade point average in the winter semester and have maintained a 3.0 career GPA at their respective schools. Once the qualification standard is met, selection to the team is then based on a combination of academic and athletic achievement.

Nance was one of nine All-ACC honorees who also earned selection to the All-ACC Academic team. Joining Nance were Leidecker, Bendik and Cummings of Clemson; Maciolek and Laura Harvey (Wethersfield, Conn.) of Boston College; Cordner and Wingrove of Miami; and Lesley King (New Castle, Wash.) of Duke.