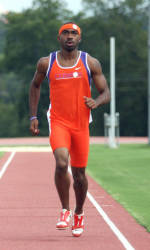 Clemson, SC – The men’s track & field team will split up and travel to three different destinations this weekend. The majority of the team will compete at the Auburn Tiger Classic in Alabama, while Matt Clark is headed to California for the Stanford Invitational and Mitch Greeley will compete in the Texas Relays on Saturday. Clark will compete in the 10,000m Saturday afternoon, while Greeley competes in the pole vault in Austin, TX at 4:30 PM.

Only one student-athlete, Alex Padgett, will compete Friday in the Tiger Track Classic at Auburn. The hammer throw is scheduled for 4:30 PM. Saturday’s action gets underway with the long jump at 12:00 noon. George Fields and Miller Moss are entered for the Tigers. Moss is also entered in the pole vault alongside Chris Spear, and that event will get underway 45 minutes after the completion of the women’s vault, which begins at 11 AM.

The first running event for Clemson on Saturday will be the 4x100m relay. Trenton Guy, Corey Brown, Cowin Mills, and Travis Padgett will race approximately 1:10 PM. Guy has been injured much of the past two months, but is hoping to return to full strength as the ACC outdoor meet approaches.

Matt Bruce, Sam Bryfczynski, and Tyler Morey are slated for the 1500m run at 1:35. Bryfczynski posted a solid time last weekend at Georgia Tech, while Morey will be making his outdoor debut in a Clemson uniform. Moss will look to improve his time in the high hurdles, scheduled for 2:05. Mills will be the lone entry in the quarter mile at 2:35 PM, while Gwantaveus Anderson and Travis Padgett will compete in the 100m dash at 3:05. Padgett ranks among the nation’s leaders with a time of 10.11, which he recorded at the Clemson Relays two weeks ago.

Jasen Turnbull will make his outdoor debut as well, in the 800m run at 3:35 Saturday afternoon. Morey is also scheduled for the event. At 4:10, Andrew Porter and Travis Swaggard look to significantly lower their times in the 400m hurdles. Porter was a regional qualifier in the event last season.

Anderson, Brown, Mills, and Padgett will compete in the 200m dash at 4:45 Saturday. Last year, Brown and Padgett qualified for the East Region Championships in the event. The final event of the day for the Tigers will be the 4x400m relay. Clemson will send two groups for the event slated to begin at 5:55 PM, led by the “A” team of Mills, Porter, Swaggard, and Brown.