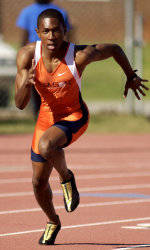 The Clemson men’s track and field team will compete at the 2005 NCAA Indoor Track and Field Championships on Mar. 11-12 in Fayetteville, AR. The Tigers will begin competition on Friday, as George Kitchens represents Clemson in the long jump and Ronald Richards competes in the preliminaries of the 60m dash. On Saturday, Adam Linkenauger will compete in the high jump, Jason Bell will contest the triple jump and Richards will compete in the finals of the 60m dash.