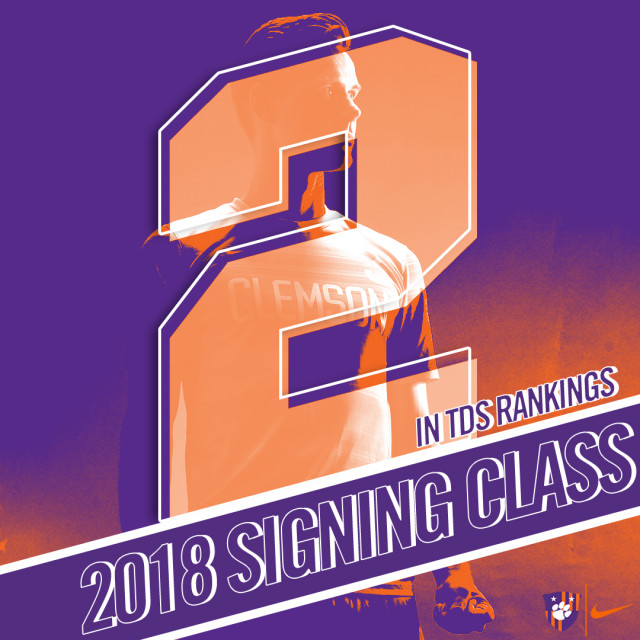 CLEMSON, S.C. – Men’s soccer head coach Mike Noonan announced the addition of Charlie Asensio, Grayson Barber, James Brighton, George Marks, John Martin, Chris Matlashewski and Mason Visconti for the class of 2018 on Thursday afternoon. Five of the seven signees have attended Youth National Team Camps, and two of those five have been a part of the national residency program. The class as a whole is ranked second in the nation by TopDrawerSoccer.

“I’m very excited about this group. I believe it’s the most experienced group, in terms of the higher levels of the youth game, that we’ve had come into the program,” Noonan said. “I’m also excited that we have four South Carolinians in this class. Even though a couple of them have applied their trade out of state recently, that’s a neat thing for our program.

“The group as a whole addresses a wide variety of positional needs for our program, from goalkeeper, through the midfield and in wide areas, all the way up to center forward. Coach and recruiting coordinator Phil Jones has done a great job assimilating players that will compete to play and contribute right away when they arrive. It also serves as a solid foundation for the future, in conjunction with last year’s very strong freshman class.”

Noonan on Asensio: “Charlie is a very accomplished player. He played with our US U-17 National Team for the last few years. He actually came to our Tiger Soccer Camp one of my first years here, and fell in love with Clemson then, and throughout the recruiting process. He is a versatile and smart player who can play at central midfield, left back or winger. Charlie is a soccer junkie, and he has a really good soccer brain.”

– Member of the USA U-17 National Team Residency

– Ranked the No. 5 player in the South Atlantic region by TopDrawerSoccer

Noonan on Barber: “Grayson is from South Carolina and grew up playing soccer here, although he is currently in residency with Sporting KC’s youth academy. He came to our camp when he was in ninth grade and committed to us in tenth grade. Grayson is a player who is dynamic in the attacking third of the field, and he is someone who we will look to to score a lot of goals for us.”

– In residency with the Sporting Kansas City Youth Academy

– Member of the USA U-17 National Team Residency

– Ranked the No. 5 player in the Heartland region by TopDrawerSoccer

Noonan on Brighton: “James is from a soccer-playing family. He moved in residency with Atlanta United as that program began two years ago, and has been the development academy’s leading scorer over the last year. He is a traditional No. 9 center forward, and is capable of scoring in a variety of ways. We’re very excited to have him.”

– Ranked the No. 8 player in the South Atlantic region by TopDrawerSoccer

Noonan on Marks: “George recently returned from the US U-20 National Team camp. He has a unique story, in that he went to a non-traditional school and has been playing as an amateur for North Carolina FC. This is his second year being exposed to and training at a professional level. He is a very accomplished goalkeeper who will compete with Ximo Miralles, Daniel Kuzemka and Nolan Lennon very well as we head into the fall.”

– Ranked the No. 4 goalkeeper by TopDrawerSoccer

Noonan on Martin: “John is a neat story. He’s a local product, and Coach Jones coached him at a very young level eight years ago when our staff first arrived in Clemson. John has been one of the hardest-working soccer players that we have watched grow through the last few years. He currently plays for CESA, and we have had a lot of success with players coming from that program and coaches Nick Finotti and Russell Shelley. John also has an affiliation with the athletic department, as his dad, Steve Martin, is our orthopedic doctor.”

Noonan on Matlashewski: “Chris may be the sleeper in the group. He is an in-state product who has played a lot of club ball and has been to camp. We are excited about what he brings in terms of pace and athleticism. He is wiry and versatile, in that he can play a few different positions. He is a player that, over the course of his four years here, people are going to turn their heads and say ‘who’s this Chris Matlashewski and where did he come from?’ We’re very excited about his potential.”

Noonan on Visconti: “Mason is a left-sided attacking player who can also play as a left back, which fills a need for our program. He is also at the MLS Academy in Kansas City with Grayson Barber. Mason was highly sought-after by a number of ACC teams, and we feel very lucky and happy to have him as part of this class. He is a player who will add depth, and also a competitive element as we look to replace Michael Melvin in the attacking left side of our offense.”