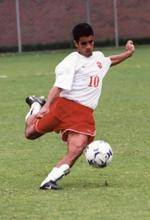 The Clemson men’s soccer team will play Maryland Saturday night in College Park, MD at 7:00 p.m. in a battle of two top 10 teams. Clemson will enter the match with a 10-1-2 record overall, 2-1-1 in league play. The Tigers are ranked fourth by Soccer America and sixth by the NSCAA. Maryland is ranked seventh in both the Soccer America and NSCAA polls.

Clemson is led in scoring by Dimelon Westfield with 17 goals and three assists for 37 points. The senior forward has scored in nine straight matches and is two matches shy of the school record of 11 consecutive contests in scoring a goal. Fabio Tambosi leads the squad in assists with nine. Doug Warren, Clemson’s goalkeeper has a 0.94 goals allowed average.

Maryland has an 11-3 record overall, and 3-1 in the ACC. The Terrapins are led in scoring by Abe Thompson with eight goals and six assists for 22 points.