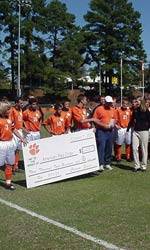 The Clemson men’s soccer team presented a check to the American Red Cross before the South Carolina match on Sunday, October 7. The team raised close to $3,500 at a car wash for the disaster relief fund on September 19.

The team donated the money to Kerri Brison of the American Red Cross before the match. Clemson defeated South Carolina 2-1 Sunday.

Game Recap Steven Rhyne came off the bench and scored a goal and had an assist, while Oguchi Onyewu finished with two assists in leading 14th-ranked Clemson to a 2-1 win over 13th-ranked South Carolina in a men’s intercollegiate soccer match at Clemson, SC Sunday afternoon.

South Carolina scored early at the 4:38 mark. Ryan Daley scored his sixth goal of the season with assists by Jordan Quinn and Joey Worthen. This was the first goal South Carolina has scored against Clemson since the 1996 season.

Dimelon Westfield scored at the 34:12 mark to even the score. Oguchi Onyewu flicked the ball to Steven Rhyne. Rhyne passed the ball to Westfield who scored the goal from 12 yards out. This was Westfield’s fifth goal of the season.

Steven Rhyne scored his third goal of the season at the 35:18 mark. Conaway had a long throw in from the left side to the near post. Oguchi Onyewu flicked a header to Rhyne who scored from close range at the right post.

“After South Carolina scored early, I was happy in the way our team stayed composed,” said Clemson Head Coach Trevor Adair. “I was pleased with the way we played in the last 35 minutes of the first half. In the second half of play, we did what we had to do to win. Both teams had chances to score. Doug Warren made some great saves and I was happy to get the result. Steven Rhyne did a great job coming off the bench. I hope he can continue to contribute that way.”

“It was a big game, and I was happy that we were able to win in front of the home crowd,” said Rhyne. We fought and battled in the second half in a big time game. In the goal I scored, the ball bounced my way and it was good timing, good place, and finish, that is what we do everyday in practice.”