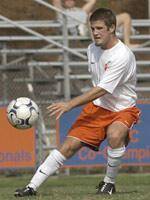 RALEIGH, N.C. – The NC State men’s soccer evened its ACC record with a 2-0 shutout over No. 24 Clemson Sunday afternoon at Method Road.

After playing through a scoreless first half, freshman Santiago Fusilier started the scoring with his first career goal in the 56th minute. Sophomore Aaron King would add an insurance goal in the 72nd minute, his team-leading fourth.

Both NC State goals were a result of strong distribution from its defenders. On the Pack’s first goal, sophomore John Queeley fed a long ball to classmate Federico Peria right outside the Clemson penalty box. Peria made a quick move to flick the ball onto a running Fusilier. Fusilier then squeezed past two defenders and his shot hit the back of the Clemson net at the 55:00 mark.

NC State’s second goal was quite similar to the first. This time it was junior Chris Catlett playing the long ball to Peria. Peria then found King who scored the goal at the 71:46 mark. Peria now has 14 assists in only 22 career games. Sophomore keeper Jorge Gonzalez recorded his first career shutout, and finished the day with four saves. Clemson’s Paul Marfuggi was busy in the Clemson nets as he had eight saves. The Wolfpack outshot the Tigers 15-12 for the game.