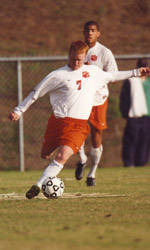 SPARTANBURG, SC-Dimelon Westfield and Steven Rhyne both scored two goals each in leading fourth-ranked Clemson to an 8-0 win over Wofford in a men’s intercollegiate soccer match at Spartanburg, SC Wednesday night.

With the win, Clemson improves its record to 8-1-1 overall, while Wofford falls to 3-8 this season. Clemson is ranked fourth by Soccer America and ninth by the NSCAA. The Tigers have won six matches in a row.

Westfield has scored 11 goals in the last six matches. For the season he has scored 13 goals and has two assists for 28 points. Last season he scored nine goals. The senior from Morvant, Trinidad was named ACC Player of the Week on Monday.

“We came out and took care of business,” said Clemson Head Coach Trevor Adair. “We did not overlook this match and we had people step up and play well. Steven Rhyne scored two nice goals and Andre Borges continues to improve. Brett Branan played outstanding. At this point in the season, I am real pleased with our depth and the way people are stepping up and playing.”

Clemson will play host to Virginia on Sunday afternoon at 2:00 p.m. in the Tigers’ next action.