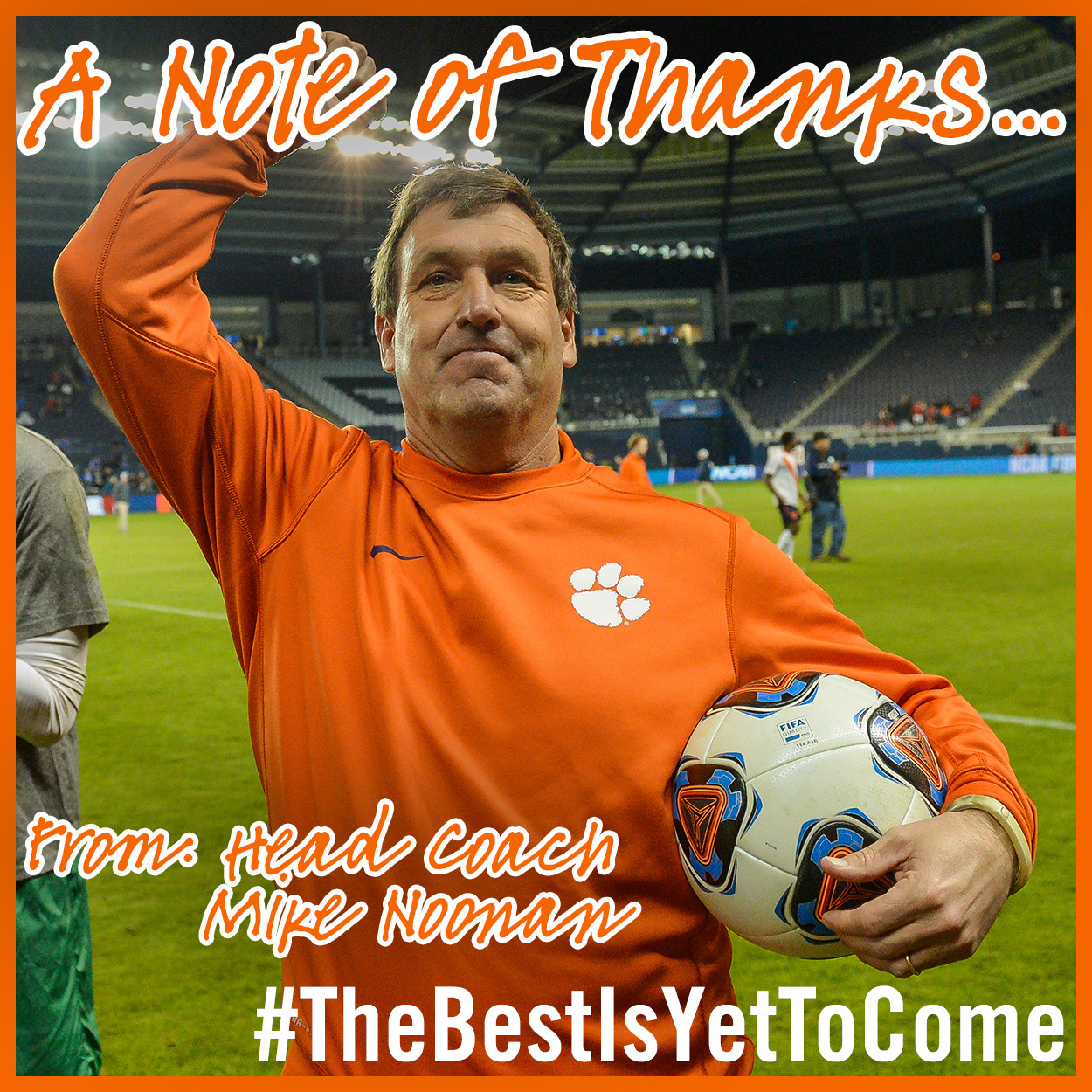 The last few weeks, since Nov. 22 when we played our first match of the NCAA Tournament, have been a bit of a whirlwind. I’ve now had a few days to reflect on the 2015 season, which ended at the College Cup last Sunday in Kansas City where we finished as the national runner-up.

It was a memorable season, and one that I feel we made great strides as a team and as a program, in putting Clemson men’s soccer back in the national spotlight. There are many people who tirelessly supported the team and staff and played a role in the program’s success, and who I would like to recognize:

Yesterday, I was notified that 17 of our 27 young men would be named to the academic Honor Roll this fall.  I’d like to thank our Academic Advisor Lindsey Ricketts and Associate Athletic Director Steve Duzan from Vickery Hall, as well as the members of the Clemson Faculty, not only for their constant support, but also for their flexibility in rearranging the final exam schedules for our players as we traveled to the College Cup during exam week.

I’d like to congratulate our two December graduates, Paul Clowes and Andrew Tarbell, who graduated yesterday, both with career cumulative grade point averages above 3.5, and who earned numerous accolades, including All-America status on the field and as NSCAA Scholar All-Americans in the classroom, a very rare accomplishment.

A huge thanks to the parents and families of our players and staff, who followed us throughout the season, and also who made the trip to Kansas City for the College Cup.

In addition, I would like to thank all of our season ticket holders and the Clemson students who supported us all season and led us to a fifth-place finish nationally in overall attendance, with an impressive 39,730 people attending our 15 matches at home at Historic Riggs Field this year.

Respecting tradition is a core value of our program so our gratitude needs to be extended to our loyal alumni – those who visited Riggs this season and those who followed us to Kansas City, in droves last weekend.  A special thanks to all of the members of the 1984 and 1987 National Championship teams who made the trek to Kansas City, as well as to Julie Ibrahim, the widow of Coach I.M. Ibrahim, who has passionately supported me and the program over the past six years, and who also made it to Sunday’s national title match.

A special thank you to our Sport Supervisor Kyle Young, and all of the athletic administration for their year-round support of our program.

Finally, my greatest appreciation and admiration goes to my technical staff and our student-athletes, who have proudly and wonderfully represented Clemson men’s soccer, not only this season, but also over the past six years, and have helped build our program and return it to national prominence once again.

I wish everyone Happy Holidays and a great start to 2016 and assure all of you, with your help, the best is yet to come!!