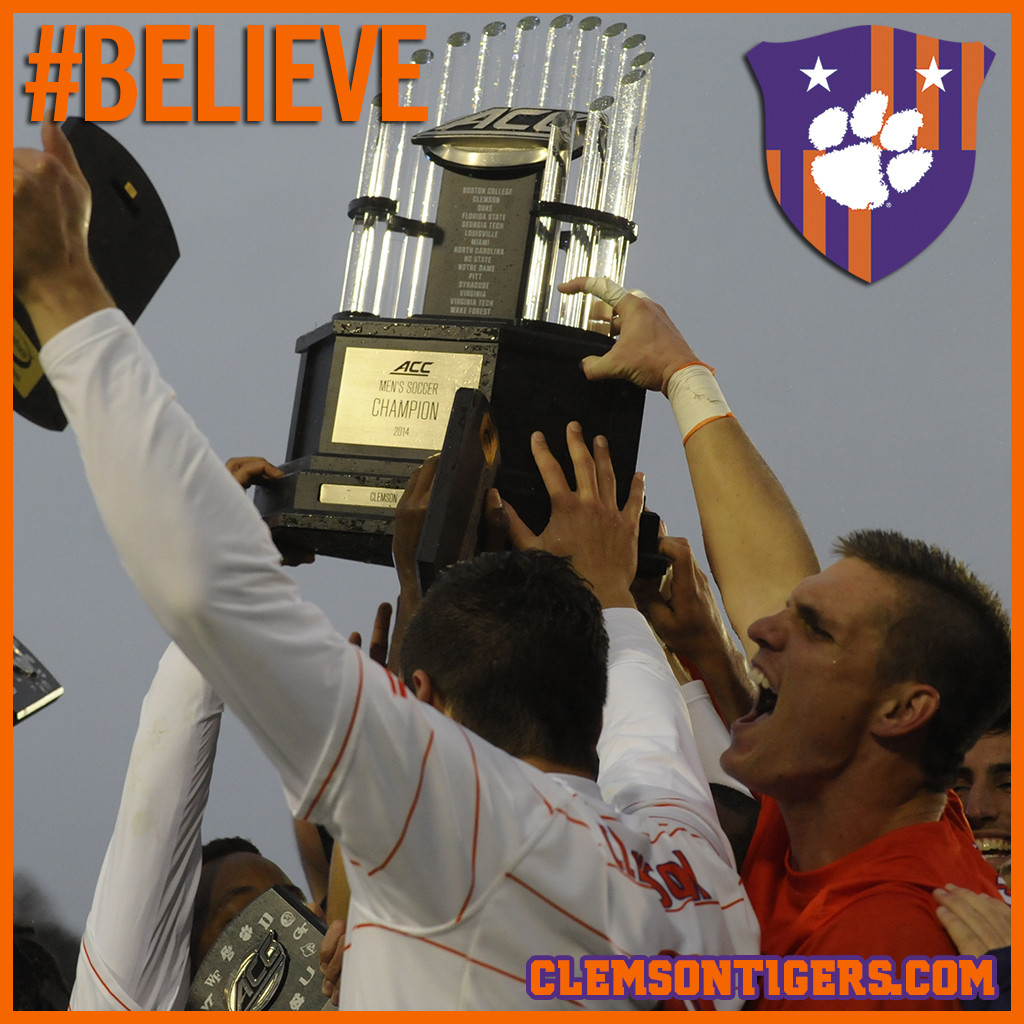 Looking back on 2014, Clemson’s season will be remembered for the thrilling win in the ACC Tournament Championship, two suspenseful penalty kick victories in the ACC Quarterfinal and Semifinal rounds, the electric atmosphere at Historic Riggs Field for the Tigers’ two home NCAA Tournament games and several key wins against top competition that helped the team advance to the NCAA Round of 16 and finish the season 12-7-3 overall, and ranked 11th nationally. While the season will be remembered for specific results, those that followed the team closely will remember the 2014 Tigers for so much more.

“This team is made up of some of the greatest character young men that I’ve been associated with in my 27 years as a head coach,” said Mike Noonan, not once, but on multiple occasions before, during and after the conclusion of the season.

Not only were they a high-character group, but the members of the team were also unselfish and hardworking, and formed a bond in which they were more than just a team, but a family. Those qualities certainly contributed to the team’s success on the field in 2014, and will undoubtedly contribute to the individual players’ future success not only in soccer, but in their professional and personal lives as well.

The 2014 team will also be remembered for helping to reestablish the tradition of the Clemson men’s soccer program. The program’s storied history includes two national titles (1984 and 1987), 14 ACC Tournament titles, 14 ACC Regular Season titles and 28 NCAA Tournament appearances, and the 2014 Tigers supplemented that list of accolades with an ACC Tournament Championship (the first since 2001) and a trip to the NCAA Round of 16 (the first since 2006).

While the season was certainly highlighted by the ACC title run, there were many significant accomplishments and accolades, both team and individual, throughout the fall. Below is an overview of those season notes.

TIGERS CLAIM ACC TOURNAMENT TITLE IN DRAMATIC FASHIONClemson defeated Louisville by a score of 2-1 in double overtime on Sunday, Nov. 16 in the finals of the 2014 ACC Tournament in Cary, N.C. to claim the conference tournament title for the 14th time in program history, and the first since 2001. That sentence summarizes the result, but it certainly does not tell the story, which is that the Tigers won in such dramatic fashion that members of the coaching staff noted it is unlikely they will ever be involved in such an incredible, improbable conclusion to a game for the rest of their careers.

The Cardinals scored early, in the 13th minute, to take a 1-0 lead, and for the next 77 minutes, it appeared they would win the ACC title in their inaugural year in the conference. However, with less a minute remaining in regulation, Clemson gained possession, and made the most of its last chance. Freshman Michael Melvin sent a cross into the box from the left side, which sophomore Alex Happi deflected backwards. Junior Paul Clowes shot the ball on the ground into the left side of the net with just three seconds remaining on the clock to send the game into overtime.

The first overtime period went by without a score, but nearly five minutes into the second extra period, the Tigers capitalized on a Clowes corner kick, which was headed by junior Kyle Fisher and touched by freshman Diego Campos before Ara Amirkanian found the net from close range. Fittingly, it was the senior and Clemson native, who grew up watching the Tigers play soccer at Historic Riggs Field, who scored the golden goal to clinch the ACC title.

CLEMSON RANKED 11th IN FINAL NATIONAL POLLClemson was ranked 11th in the final poll released by the NSCAA (National Soccer Coaches Association of America) on Dec. 16. It was the Tigers’ highest ranking in the final national poll since 2005, when the team was ranked in a tie for third after reaching the NCAA Final Four.

Clemson was one of six teams from the Atlantic Coast Conference to finish in the NSCAA final top 25, while five of the six teams finished in the top 11 nationally.

Clemson’s Final Rankings in All Polls10 – BennettRank.com11 – NSCAA13 – TopDrawerSoccer.com19 – Soccer America (The most recent poll was released Nov. 11, 2014 at the conclusion of the regular season.)

CLEMSON ONLY TEAM WITH REGULAR SEASON WINS OVER TWO 2014 COLLEGE CUP TEAMSNine of Clemson’s opponents from the 2014 season were ranked in the final NSCAA poll, a testament to the challenging slate the Tigers faced in the fall. The team posted a 5-5-2 record in 12 games against those nine opponents. In addition, during the regular season, Clemson defeated Virginia, which finished first in the final poll after winning the 2014 NCAA Championship, and Providence, a 2014 Final Four team which finished third in the final rankings. The Tigers are the only team in the country to defeat two of this year’s NCAA College Cup teams during the 2014 regular season.

MANY TIGERS IN THE SCORING COLUMNOne statistic that was most representative of the teamwork and unselfishness displayed by the 2014 Tigers was in the scoring column. Fifteen different players scored at least one goal on the season, with 13 of the 15 scoring two or more goals, while only one player, sophomore Austen Burnikel, scored more than three times. Burnikel posted five goals on the season, including three game-winning goals, which led the team in both categories. In addition to Burnikel, eight other Tigers netted game-winners throughout the year.

In terms of assists, Clemson players shared the ball, as the team as a whole recorded 44 assists on its 37 goals on the season. Thirteen different Tigers tallied at least one assist, led by junior T.J. Casner and senior Manolo Sanchez with six apiece.

FOUR TIGERS EARN DEGREES IN DECEMBER 2014Four members of the Tigers’ 2014 senior class – Ara Amirkhanian (Health Science), Amadou Dia (Sociology), Chris Glodack (PRTM) and Phanuel Kavita (Psychology) – earned their Clemson University undergraduate degrees on Dec. 18, 2014. The four players graduated in just three and a half years, and joined classmates Bobby Belair and Manolo Sanchez as graduates, meaning that all six seniors on the 2014 team have their degrees. Belair is in his second year of graduate school, and earned his undergraduate degree in Philosophy from Brown prior to transferring to Clemson, while Sanchez graduated from Clemson in May of 2014 with a degree in Communication Studies.

TIGERS REACH NCAA ROUND OF 16Clemson was the No. 7 national seed in the 2014 NCAA Tournament, thus receiving a first-round bye. The Tigers hosted 25th-ranked Coastal Carolina in the second round, and defeated the Chanticleers by a score of 2-1 on Monday, Nov. 24 in front of a near-capacity crowd at Historic Riggs Field. Junior Paul Clowes and freshman Diego Campos netted the goals in the contest, while Campos, Alex Happi and Manolo Sanchez tallied assists. Sophomore keeper Andrew Tarbell posted six saves to record the win in goal.

The Tigers hosted 16th-ranked North Carolina in the NCAA Round of 16 on Sunday, Nov. 30 and fell to the Tar Heels 2-1 in front of another raucous crowd at Riggs. Junior Kyle Fisher scored the lone Clemson goal on a penalty kick. The Tar Heels went on to tie UCLA 3-3 in the Elite Eight, before failing to advance on penalty kicks against the Bruins, who finished 2014 as the NCAA runner-up.

CLEMSON ADVANCES IN ACC TOURNAMENT IN PENALTY KICKS, TWICEClemson hosted Wake Forest in the ACC Quarterfinals on Sunday, Nov. 9 and tied the Demon Deacons 1-1 through regulation and two overtime periods, sending the game into penalty kicks. Senior Ara Amirkhanian scored on the Tigers’ first attempt, giving the team a 1-0 advantage. Sophomore Thales Moreno was also successful on his attempt, and senior Phanuel Kavita scored to clinch the 3-2 penalty kick win for Clemson. Redshirt junior goalkeeper Chris Glodack, who entered the game in goal prior to the shootout, saved three Demon Deacon shots to help lift the Tigers to the next round of the tournament.

The Tigers posted another dramatic result against No. 2 Notre Dame in the ACC Semifinals in Cary, N.C. on Friday, Nov. 14. The Irish scored in the 26th minute and maintained a 1-0 lead through the majority of the game. With less than two minutes remaining in regulation, senior Bobby Belair tied the game off of a well-placed corner kick by junior Paul Clowes. After two scoreless overtime periods, Clemson advanced to penalty kicks for the second straight game.

Once again, Glodack entered the contest in goal and provided a tremendous spark, saving three Notre Dame attempts. Junior Kyle Fisher, senior Manolo Sanchez, Amirkhanian, Belair and junior T.J. Casner capitalized on their chances to give Clemson the 5-4 advantage and send the Tigers to the ACC title match.

The success in penalty kicks was a bit of redemption for the Tigers, who failed to advance in the first round of the NCAA Tournament in 2013 after tying Elon and falling 4-1 in penalty kicks.