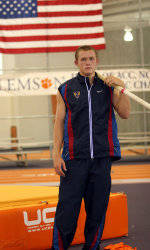 Greeley First Tiger Pole Vaulter Ever to Earn All-America HonorsClemson sophomore Mitch Greeley became the first men’s track & field athlete ever to claim All-America honors for the school when he tied for eighth at the NCAA Indoor Championships on March 10, 2006. He cleared 17’6.5″ in his first-ever trip to the National Championship. He was the first Tiger pole vaulter ever to proceed to the NCAA Indoor Meet, while only one Clemson athlete has ever competed in the Outdoor Championships.

Hobbs Claims Clemson’s First All-America Honor in HeptathlonClemson had two student-athletes that competed at the NCAA Indoor Meet on March 10-11 in Fayetteville, AR. Senior Brent Hobbs and junior Ryan Koontz performed well in the event, finishing 10th and 14th respectively. Hobbs’ 10th-place finish was a result of 5,361 points, while Koontz totaled 5,249. It marked the first time the Tiger program ever had two athletes compete in the heptathlon. Clemosn’s most recent performer in that event had been Rick Hill during the 2004 season.

Hobbs became the first Tiger men’s track & field athlete ever to earn All-America honors in the heptathlon. By virtue of being one of the top eight American finishers in the multi-event competition, Hobbs earned the top honor afforded track & field student-athletes. Clemson’s only other multi-event All-American was Andy Giesler in the 2001 NCAA Outdoor decathlon.

Greeley set the school record with a clearance of 17’7″ on his way to the pole vault title, his first-ever ACC Championship as a Tiger. He defeated home favorite Brian Mondschein of Virginia Tech in that event. In the heptathlon, Brent Hobbs for the individual title in that competition. In the high jump, Linkenauger claimed his third straight indoor title and fifth straight overall championship in that event. He cleared 7’2.5″ on his way to the title.

Other athletes earning All-ACC honors for Clemson were Roy Cheney, and Travis Padgett. A senior from Grovetown, GA, Cheney was third in the 60m hurdles and earned his fourth All-ACC honor in that event after a time of 7.94 seconds. In the 60m dash, Padgett was runner-up and Brown was third in times of 6.74 and 6.78, respectively.

2006 Tigers in the Indoor Record BooksClemson’s 2006 team has had quite an impact on the school record books this season. In total, the Tigers currently have 10 athletes that rank in the top five all-time in their respective indoor events.

Adam Linkenauger high jump of 7’3.75″ at Iowa State not only was a personal best, but also it moved him into a tie for first place on the Tigers’ all-time indoor high jump list. Victor Smalls also cleared the same height in 1985.

In the 60m dash, red-shirt freshman Roy Cheney ranks fourth on the Tigers’ all-time 60m high hurdles list, as he clocked a 7.77 in 2004. Itay Magidi is listed fourth in both the 3000m and 5000m on Clemson’s all-time performance list. Both marks occurred during the 2005 season, but he also holds the top marks on the Tiger team in both events this year as well.

Sophomore Mitch Greeley elevated his position from seventh overall to first in Clemson’s indoor pole vault records. He cleared 17’7″ at the ACC Championships two weekends ago.

Jason Bell ranks third on Clemson’s all-time list in the triple jump, a mark he established in 2005. He holds the Tigers’ top marks in that event again this season.In the 35lb weight throw, Danny Alge recently moved into third place on Clemson’s all-time list. He had a toss of 60’3″ at Notre Dame’s Meyo Invitational on February 3-4, then topped that with a throw of 61’0.75″ at the ACC Championships.

Brent Hobbs, and Mike Feathers all rank in the top five in Tiger history in the heptathlon. Koontz moved to second all-time with his recent performance of 5,515 points at the ACC Championships, while Hobs ranks third at 5,427, and Feathers is fifth at 5,131.

Clemson’s 2006 Event WinnersThe Tigers had 16 event champions during the 2006 indoor season. Tallying the most first-place finishes for Clemson was Adam Linkenauger with four titles and Itay Magidi each with two. Itay Magidi was first at that meet.

The 4x400m relay team of Adam Linkenauger finished first in the high jump,

Clemson totaled six event champions at the home Indoor Invitational held January 20-21. The Tigers captured the crowns in the 3000m (Jason Bell).Linkenauger continued his early-season success at Notre Dame’s Meyo Invitational, where he cleared 7’3″ in the high jump. Bell won the triple jump for Clemson at the Iowa State Classic.