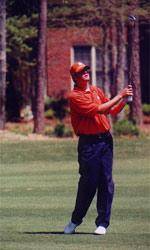 Johnson City, TN – D.J. Trahan and Matt Hendrix each had under-par rounds on Sunday, but it was not enough to improve Clemson’s team standing in the final round of The Ridges Intercollegiate in Johnson City, TN. The Tigers finished ninth as a team in the 15-team field that included 12 teams ranked in the top 25. Clemson had team rounds of 297-284 and 290 in the 54-hole event for a final team score of 871.

Clemson’s streak of 26 consecutive top seven finishes did end with the ninth place finish. The Tigers had finished in the top half of the field in 51 consecutive events.

Clemson’s top finisher for the tournament was freshman Jack Ferguson, who had a 215 for the event, one-under par, good enough for a 13th place ranking. It was the first tournament of the red-shirt freshman’s career. The native of Seneca had a 68 in the second round, the only round in the 60s for the Tigers on the par 72 Ridge Country Club Course. Ferguson, Trahan and Hendrix all had 10 birdies in the three rounds.

Gregg Jones, a returning starter from last year’s second-ranked team, shot a 222, including a 74 on Sunday. Junior Ben Duncan had a 75 on Sunday to finish at 232.

Clemson at The Ridges Intercollegiate