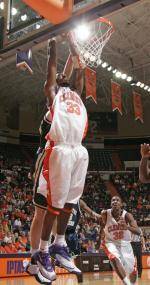 Men’s Basketball To Host The Citadel Tonight At 7:00 PM

Clemson was ranked 24th by Sagarin and 25th by collegerpi.comfor games through Wednesday, December 15th. Clemson was rankedfifth among ACC teams in Sagarin. Clemson has won 11 straight gamesagainst The Citadel and holds a 57-21 advantage in the series. (Itshould be noted that The Citadel records show a 54-24 lead forClemson. The Citadel last defeated Clemson in 1978-79 in Charlestonby a 58-56 score. The Citadel last won in Clemson in 1968-69, thefirst year of Littlejohn Coliseum. Clemson leads the nation insteals per game with 13.5. The school record for steals in a seasonon a per game basis is 10.89 in 1976-77, so this year’s squad is ahead of the record pace. Clemson has had double figures in stealsin four of the first seven games, including a school record 25 inthe opener against Hampton. Akin Akingbala is coming off his mostproductive game as a Clemson player. The 6-9 junior had a careerhigh 16 points (his high figure by five) and 10 rebounds in the winover Norfolk State. It was his second career double-double. Clemsonis 6-0 this year when it out-rebounds the opposition and 0-1 whenit is the loser in the rebound margin stat. The Tigers have a +4.6rebound margin so far this season. In addition to Clemson leadingthe nation in steals per game, the Tigers are 32nd in three-pointshooting percentage, 33rd in assists per game an 45th in blockedshots per game. Shawan Robinson is ranked 12th in the nation inthree-point percentage nad is 38th in three-point goals per game.Vernon Hamilton is 34th in the nation in steals and Sharrod Ford is30th in blocked shots per game. The Citadel is 6-1, the same recordas Clemson, entering Friday night’s game. Donny McLendon, asophomore guard who played in his first game of the year onWednesday night, scored 20 points in 24 minutes in the Bulldogs81-58 win over Savannah State. Clemson ranks fourth in the ACC inturnover margin with a +5.29 figure so far this year. Clemson waslast in the ACC in that area in 2003-04 with a -5.33 figure.Clemson has forced 22.4 turnovers per game so far this year, secondto Virginia Tech’s 23.3. The Citadel last defeated an ACC team in1978-79, its 58-56 win over Clemson in Charleston. The Citadel has34 all-time wins over ACC opponents. Clemson outscored NorfolkState 31-14 in terms of points off turnovers on Tuesday night.Clemson has won that stat in six of the first seven games and has a180-89 advantage for the season.