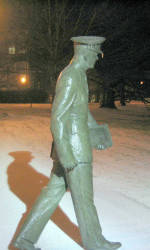 Clemson to Honor Fallen Soldiers at The Citadel Basketball Game

During halftime ceremonies of Friday night’s (Dec. 17) The Citadel-Clemson men’s basketball game, the Clemson Athletic Department in conjunction with the Clemson Corps, Army ROTC, Air Force ROTC will honor two Clemson alum’s and eight Citadel alum’s (see list below) who have been killed in the Iraq War. The game is scheduled to begin at 7:00 PM at Littlejohn Coliseum.

Military personnel presenting their military identification can purchase a reserve seat for $9.00 for any family member.

Fans are asked to bring the following items (see list below) to the game to show appreciation for the sacrifice the men and women who are deployed are making in the fight for freedom during the holiday season. All items collected will be given to the South Carolina National Guard and then forwarded to South Carolina troops deployed in Iraq.

Suggested items needed to send to the troops and their families: