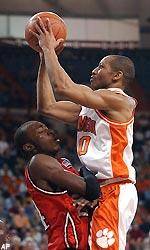 Josh Powell had 14 and Cameron Bennerman added nine for North Carolina State (16-10, 9-6 Atlantic Coast Conference), which has won three of its last five.

Edward Scott scored 21 and Tomas Nagys added 13 for the Tigers (15-11, 5-10), who have lost three straight and desperately need a win at Georgia Tech on Saturday to avoid the conference play-in game.

North Carolina State used an early run to go up 11 at halftime and Clemson closed the gap to just two points on eight different occasions in the second half but could never take the lead.

The Wolfpack looked like they had the game sealed, hitting seven of eight free throws in the final 39.2 seconds. But Nagys’ was fouled by Powell underneath the basket with 15 seconds to go and the senior converted the 3-point play to cut the lead to 62-60.

Sherrill was immediately fouled and made just 1-of-2 free throws with 6.5 seconds remaining, giving the Tigers hope for a last second shot.

But Scott, who was double-teamed, lost control of the ball near the 3-point line to end the game.

Clemson was up 12-7 early, but the Wolfpack used a 19-2 run during the middle of the first half to pull away from the Tigers, who went seven minutes without a basket, missing five shots during that span. Sherrill had three 3-pointers and finished the opening half with 14 points.

Clemson fought back and trailed 38-36 on Nagys’ basket with 13:23. Sherrill’s lone basket was the only points for the Wolfpack in the second half until Powell’s basket put them up 36-32 with 14:08 remaining.

The Wolfpack held at least a six-point lead during the rest of the half until Scott’s two free throws cut the lead to 52-48 with 3:49.

Scott, who was Clemson’s leading scorer averaging 18.3 points a game was held to just four points and scored his final basket on a layup at the buzzer to end the half at 32-21.

Forward Levi Watkins, who was averaging 6.3 points a game and 2.6 rebounds for North Carolina State, missed the game with a groin injury.