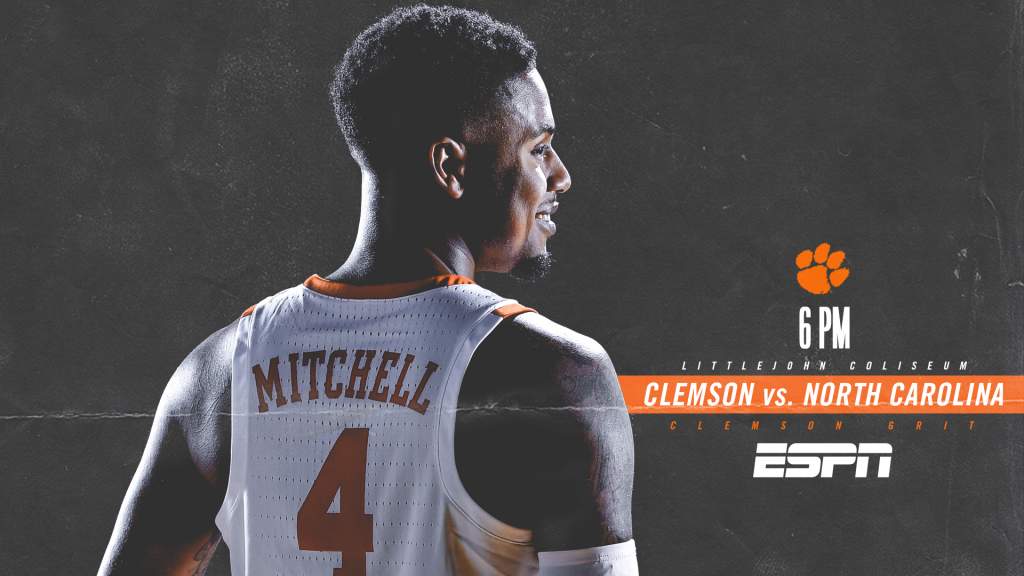 CLEMSON vs. NO. 5/5 NORTH CAROLINA

• The Clemson Tigers will look for its third consecutive victory after a 14-point win at Pittsburgh on Feb. 27 when it hosts North Carolina tonight. Tipoff from Littlejohn Coliseum is scheduled for 6:01 p.m. ET.

• The contest will be televised on ESPN with Mike Couzens and Cory Alexander calling the action courtside, while Don Munson and Tim Bourret will be on the radio waves. The radio call will be available on the Clemson Tigers Network and Tunein.com.

• The Tigers will look for its sixth-straight victory over Pittsburgh tonight, including a season-sweep of the Panthers.

• The 14-point victory over Pittsburgh was Clemson’s 25th ACC road win by double-digits in its history – the seventh under head coach Brad Brownell.

• Clemson ranks fourth in the ACC in scoring defense (63.8 points allowed per game) and second in conference games (61.9).

• According to KenPom, Clemson’s adjusted defensive efficiency now ranks 11th in the country (91.1).

• Clemson’s win at Pittsburgh was its fourth this season when allowing 50 points or less in a game. The Tigers are 4-0 in those games this season, they have won their last 24 such contests and are 43-2 overall in those games under Brad Brownell.

• The Tigers’ head man will also look for his 167th career victory at Clemson. He is currently just 11 shy of tying Cliff Ellis for the most in program history (177).

• Marcquise Reed is one just two guys in the country to average at least 19.0 points, 5.5 rebounds, 3.0 assists and 2.0 steals per game this season.

• Reed jumped into 17th on the all-time scoring list. Reed now has 1,356 points in his Clemson career.

• Elijah Thomas surpassed 600 career rebounds in his time at Clemson and became just the seventh player in program history to amass 900 points, 600 rebounds and 150 blocks.

Due to the amount of rainfall that the area has had over the last number of days, Clemson athletics will rope off portions of the following grass areas:

We ask that you please do not park in those areas and find paved parking lots.