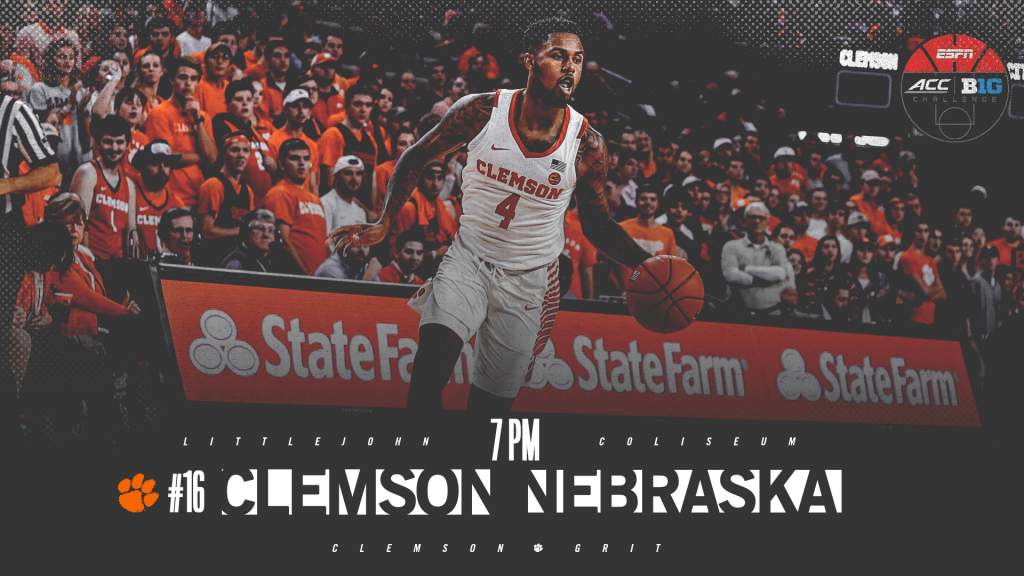 • Clemson is 1-0 all time against Nebraska with the only meeting coming during the 2016-17 ACC/Big Ten Challenge in Clemson.

• The Tigers are 11-7 all-time in the ACC/Big Ten Challenge, including 5-4 on its home floor. Clemson has won two-straight in the series.

• Marcquise Reed became the 40th player in program history to amass 1,000 points as a Tiger following his 27-point effort against Creighton (Nov. 21).

• Shelton Mitchell surpassed the 800-point mark in his career last time out against Creighton. Mitchell remains on pace to become the 13th player in Clemson history to amass at least 750 points and 325 assists.

• With tonight’s contest against Nebraska, this marks Clemson’s 19th appearance in the ACC/Big Ten Challenge.

• The Tigers are third overall between both leagues with 11 wins (Duke 17, Virginia 12). It is also more wins than any program in the Big Ten.

• Clemson is 11-7 overall, including 5-4 on its home floor. It’s six road wins is the best among all programs in both leagues.

• Clemson did not have a matchup in 2013-14 due to the fact there were three more teams in the ACC than the Big Ten.

• The Tigers will be going for win No. 69 all-time against the Big Ten tonight against Nebraska.

• Under head coach Brad Brownell, Clemson is 5-4 against members of the Big Ten, including victories in its last two contests.

• Clemson won at Ohio State last season and won at home in 2016-17 against Nebraska.

• Marcquise Reed surpassed the 1,000-point mark in a Clemson uniform with a 27-point performance against Creighton in the championship game of the Cayman Islands Classic (Nov. 21).

• Reed became the 40th member of the 1,000-point club at Clemson and the first Tiger to do so since Donte Grantham accomplished the same feat last season.

• Marcquise Reed eclipsed the 1,500-point mark of his career with a 24-point performance against Georgia (Nov. 20).

• This season Reed is averaging 19.8 points per game to lead Clemson – that mark ranks fourth in the ACC.

Beginning with tonight’s men’s basketball game vs. Nebraska, Clemson Athletics will implement walk-thru metal detectors at all entrances to Littlejohn Coliseum.  Fans will be required to remove keys, cell phones, cameras and other electronics from their pockets prior to walking through metal detectors.  Shoes, coins, wallets, belts an jewelry will not need to be removed.  Fans who either have a relevant medical condition or do not feel comfortable walking through the metal detectors can notify event staff and participate in an alternative screening process.  The addition of the walk-thru metal detectors will result in additional time need to enter Littlejohn Coliseum, so please plan accordingly.  Clemson officials will be working throughout the season to ensure that this additional time is kept to a minimum.