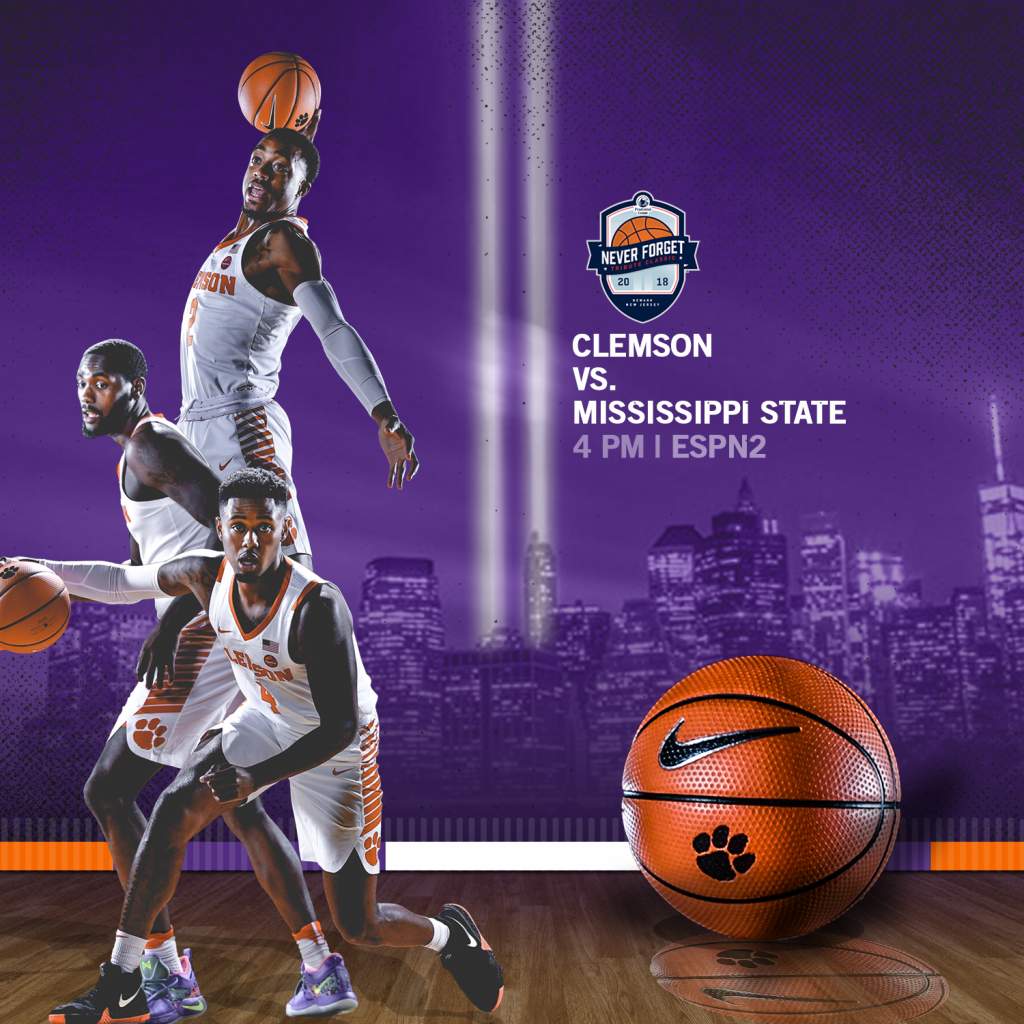 • Clemson will face Mississippi State for the fourth time in program history today in the 2018 Never Forget Tribute Classic.

• The Tigers are 3-0 all-time against the Bulldogs. The last meeting was an 84-82 victory in Starkville.

• There is a current connection between both programs – former Tiger guard Tanner Smith (2008-12) serves as the Bulldogs’ director of basketball operations.

• Last time out, Elijah Thomas notched his third double-double of the season and 13th of his career. Of his 12 double-doubles in a Tiger uniform, Clemson is 10-2 overall in those contests.

• The Tigers have won seven-straight games against members of the SEC, dating back to the 2016-17 season.

• The Tigers will play at least two more games against SEC opponents next season with today’s contest against Mississippi State (Dec. 8) and a date with in-state rival South Carolina (Dec. 22).

• Last season the Tigers went 3-0 against SEC members with regular season wins over Florida and South Carolina and a dominating win over Auburn in the NCAA Tournament’s second round in San Diego.

• With 155 wins, Brownell is now just one shy of tying Bill Foster (156) for second all-time on the Clemson win list.

• He remains just 22 victories of tying Cliff Ellis for the most in Clemson history and 23 from sole possession of first all time.

BRAD BROWNELL ON PLAYING IN THE 2018 NEVER FORGET TRIBUTE CLASSIC

“We are very honored to play in such a meaningful event as the Never Forget Tribute Classic,” said head coach Brad Brownell. “It will be a great challenge as Coach Howland has once again put together a very talented and disciplined team. This game will prepare us well for the rigors of the ACC.”

The Never Forget Tribute Classic will again partner with the Families of Freedom Scholarship Fund in support of the education of children of the victims of the September 11 terrorist attacks.

Established within one week of September 11, 2001, the Families of Freedom Scholarship Fund provides education assistance for postsecondary study to financially needy dependents of the people killed or permanently disabled in the terrorist attacks. The Fund has already delivered millions of dollars in scholarship support, and will continue to offer education assistance through the year 2030, ultimately delivering more than $100 million to affected family members. For more information, visit FamiliesofFreedom.org.