A series of road closures may impact travel into and out of Clemson in December and January. 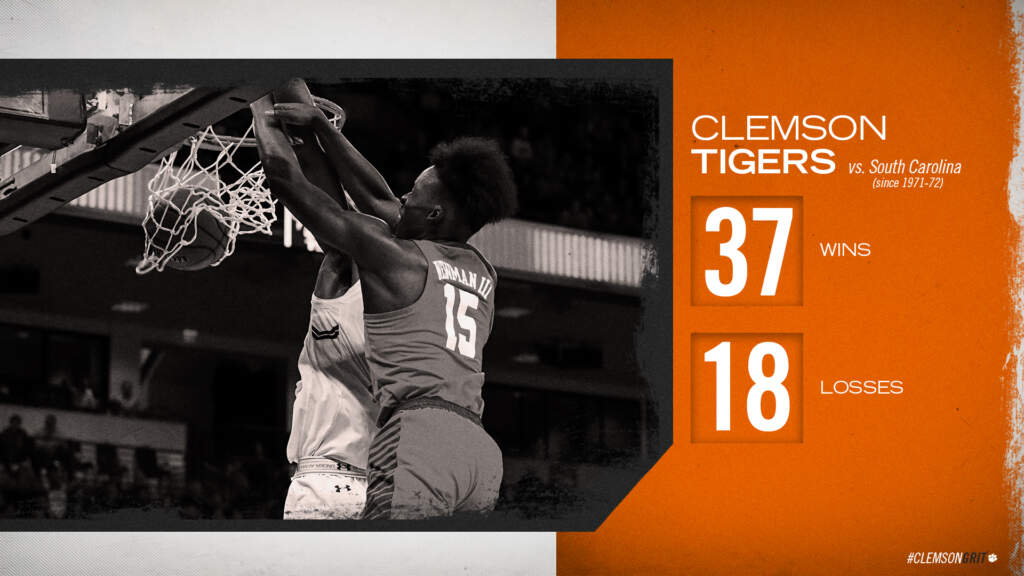 SETTING THE SCENE BETWEEN THE TIGERS AND GAMECOCKS

• The Clemson Tigers will return home for the first time since Nov. 17 and host rival South Carolina. Tipoff from Littlejohn Coliseum in Clemson, S.C. is slated for 5:05 p.m. ET.

• The contest will be televised on ESPN2 with Roy Philpott and Jordan Cornette calling the action courtside, while Don Munson and Tim Bourret will call the action on the radio waves. The radio call will be available on the Clemson Tigers Network and Tunein.com.

• South Carolina holds a 90-79 lead in the series, but Clemson has held a 37-18 upperhand since the Gamecocks left the Atlantic Coast Conference following the 1971-72 season.

• Since the Gamecocks’ departure from the ACC, Clemson has had three separate winning streaks of at least six games in the series, most recently from 2004-10.

• In its last nine games against members of the Southeastern Conference the Tigers are 8-1, including 3-0 against South Carolina.

• Tevin Mack led the Tigers in scoring for the third time this season with his eighth double-digit scoring game of 2019-20. Mack scored 11-straight points in the second half against the Seminoles. The 11 points were a new season-high for Mack who previously had scored nine in a row.

• Al-Amir Dawes finished with 13 points – his fourth double-digit scoring game of the season.

• Jonathan Baehre made his Clemson debut against Florida State. Baehre transferred to Clemson from UNC Asheville during the 2018 offseason and sat out the 2018-19 season due to transfer rules.

• Baehre tore his ACL on May 21, 2019, missing the 2019 World University Games and the first eight games of the season, but committed to his rehab was medically cleared by the athletic training staff last week.

• Prior to playing against the Seminoles, Baehre had not played a college game since March 13, 2018. He posted 28 points, 14 rebounds and five blocks in a UNC Asheville NIT loss at USC.

• The Tigers hosted its Annual Tiger Wonderland event on Thursday. The team and staff invited underprivileged kids from local communities to Littlejohn Coliseum for a night of fun, games, food, snacks and presents.