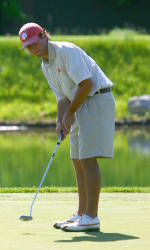 Martin Reaches Semifinals of US Amateur

Clemson, SC – Ben Martin continued his run in the United States Amateur at Southern Hills in Tulsa, OK on Friday with a 2 & 1 victory over David Lingwerth of Sweden. However, Clemson teammate Phillip Mollica dropped a quarterfinal match to Bhavik Patel, 1-up.

Martin now faces Charlie Holland, a senior on the University of Texas golf team, on Saturday. Television coverage of that semifinal match begins at 4:00 PM on NBC. It will be shown on a tape delay basis. To follow the progress of the match on the internet to go usamateur.com.

Martin is the first Clemson golfer to reach the semifinals of the US Amateur since Danny Ellis reached the finals in 1993. It has been quite a run for Martin, who is playing in his first US Amateur. He did play in the 2009 US Open however at Bethpage Black in June. All four of Martin’s matches have gone to at least the 17th hole, with two wins coming in extra holes.

Martin got off to a rough start on Friday as Lingwerth won each of the first two holes. He came back to win the fourth hole, but then lost the fifth hole when it was determined his caddie, his father Jim Martin, raked a bunker before he had struck his shot. Martin had reached a greenside bunker in two on the par five hole, but had to take an X on his scorecard for that hole when he saw what his father had done.

But, Martin came right back to win the sixth hole with a par and cut the margin back to one down. “That was a big hole to cut his lead back to one-up at the time,” said Ben. “It made my dad feel a lot better also.”

Martin won the ninth hole with a par to square the match. The two golfers had a streak of nine straight holes from the eighth to the 16th holes in which one of the golfers won the hole. “I think the biggest hole of the match might have been the 13th hole when I made a birdie to go one-up. I had the lead the rest of the match after that hole.” Martin won six of the nine holes from the 8th to the 16th.

Martin clinched the match on the 17th hole. He played the hole conservatively, as he has all week, and hit a six-iron to within 88 yards on the 274-yard hole. “I am very comfortable from that 85-90 yard distance. I had confidence I could get it close with a second shot.”

Needing to win both of the last two holes, Lingwerth went for the green and hit his drive to within 15 feet of the hole. Martin’s second shot was outstanding and his wedge finished just seven feet right of the hole. Lingwerth missed his eagle putt. Martin then made his birdie putt to have the hole and thus win the match.

“Neither of us had our A-game today. There were a lot of holes won with pars. I am just glad to survive and move on.”

“I know Charlie pretty well because we have played in the same college tournaments and summer events over the last few years,” said Martin. “It should be a great match. He has really been playing well.”

Mollica won the first hole of his match with Patel with a birdie and never trailed through the first 15 holes. He was two up through 10 holes. But, Patel won the 15th and 16th holes to go two-up with two to play. Mollica won the 17th hole with a par and appeared to have an advantage on the 18th when he reached the green in two and Patel was still 15 yards short of the green with his second shot. But, Patel hit his third shot just six feet by the hole, then made the putt to tie the hole and thus win the match 1-up.