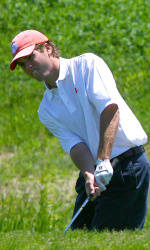 Clemson, SC – Ben Martin has been named to the All-ACC Academic Golf team for the second consecutive year. The rising junior from Greenwood, SC has now been selected to the team as a freshman and sophomore, the first Clemson golfer to accomplish that distinction.

Martin ranked third on Clemson’s fifth-ranked team in stoke average this past year with a 73.57 average. He was ranked 91st in the nation in the final Sagarin computer rankings.