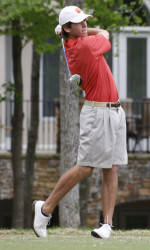 CLEMSON, SC – Former Clemson All-American Ben Martin earned his first professional paycheck on Saturday at the E-Golf Professional Tour’s Southern Open in China Grove, NC. Martin was an All-American and three-time All-ACC golfer at Clemson who concluded his career with the Tigers this past June.

Martin was one of five former Tigers who finished in the top 25 of the Southern Open. Matt Hendrix, a starter on Clemson’s 2003 National Championship team, finished seventh with a 272 score, while Martin Catalioto, also a member of that national championship team, was 14th at 274.

Danny Ellis, an All-American at Clemson between 1990-93, finished 19th with a 276 score. Ellis is attempting a comeback from a long list of injuries. He is a veteran of 110 career PGA Tour events.

Tommy Biershenk, a member of Clemson golf teams in the mid 1990s, finished 25th with a 277 score. Biershenk is currently second on the E-Golf Pro Tour money list with $92,623 so far this summer.

Brian Duncan, another member of Clemson’s 2003 National Championship team, finished 34th with a 279 score and Phillip Mollica, a starter on the Clemson 2009 team, finished 42nd with a 280 score.