CLEMSON, S.C. — The doubles pair of Eleni Louka and Jenna Thompson has been named to the ITA All-Americans Championships, the organization announced on Monday. The tournament will be played at the LTP Facilities in Charleston, S.C. from October 4-10.

Louka and Thompson were 6-8 overall last season doubles competition, playing a majority of their matches on Court 1, where they went 4-7 as a team, which included a highlight win over the No. 2 nationally-ranked pair of Jones & Flores from Georgia Tech.

The two starred for the Tigers as the team’s No. 1 and 2 singles players throughout the campaign. Louka was also named to the qualifying singles alternate list.

The Tigers have their first competition of the season starting Friday, Sept. 17 at Furman. 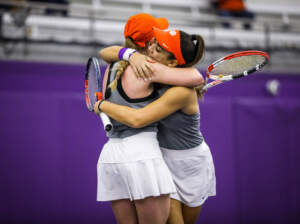