CLEMSON, S.C. — Eleni Louka (72) and Jenna Thompson (83) were both ranked in the first edition of the ITA top-125 singles rankings. Louka played all but two of her matches on Court 1 in her sophomore season, and Thompson played 13 matches on Court 2, while also going 3-1 from the first position.

The pair was also ranked the No. 29 doubles team in the nation. They will look to improve upon their 6-8 record as a team from last season, which included a victory over the No. 2 ranked doubles pair in the country. Overall, the pairing was 2-2 against nationally ranked opponents.

The Tigers will open their fall season on September 17 in Furman, and will look to their three newcomers to help build off of last season’s positives. 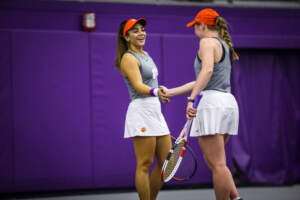