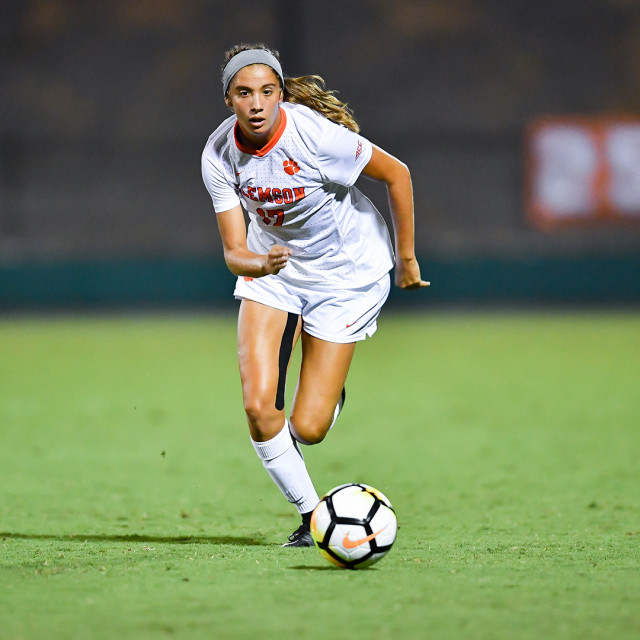 CLEMSON, S.C. – The Clemson women’s soccer team dropped a 2-1 decision against Louisville on Thursday night at Historic Riggs Field. With the loss, Clemson slips to 7-4-1 overall and 1-3-1 in conference play, while Louisville improves to 8-5-0 and 2-3-0.

“I don’t think we did a good enough job taking care of the ball tonight,” said Head Coach Eddie Radwanski. “We were a little sloppy and inconsistent with our play, and Louisville had something to do with that. I thought that Louisville was good tonight and was the better team. We shot ourselves in the foot a little bit, and we need to be better, but with that being said, we still had chances that we would have liked to put in to make the game a little easier. But we didn’t manage the game well, and I need to take ownership of it. I didn’t prepare my team as well as I probably could have. We will recover, watch film, talk about our next opponent and about valuing the ball more than we did tonight. If we do that, we will see a better performance and will be happier with the things that happen in the run of play.”

In the 15th minute, Mollie Rouse’s shot was saved by Sandy MacIver. The deflection landed at Allison Whitfield’s feet, and she buried it from five yards out, giving Louisville a 1-0 lead. Clemson rallied back with several opportunities, led by junior defender Sam Staab, who took one shot that sailed just over the cross bar and another that was stopped by Gabrielle Kouzelos. Patrice DiPasquale was able to get one final shot off as the first half came to an end.

The Tigers came out strong in the second half, netting the equalizer in the 51st minute. Sophomore Julie Mackin found Shannon Horgan on the left side, and Horgan sent a cross into the box that found the head of Mariana Speckmaier. Speckmaier redirected the cross into the back of the net, good for her sixth goal of the season.

Nine minutes later, Whitfield sent a cross over to Brooklynn Rivers, who crashed the net and finished, giving the Cardinals a 2-1 lead. Clemson had five more opportunities to tie the match, with the best coming in the final two minutes on Jenna Polonsky’s shot that just missed sneaking inside the back post.

For the match, the Tigers out shot Louisville 14-9, with five shots on goal to Louisville’s nine. MacIver recorded five saves in the 90 minutes of play.

The Tigers return to action on Sunday, Oct. 8 as they host Virginia Tech for a 1 p.m. match at Historic Riggs Field.