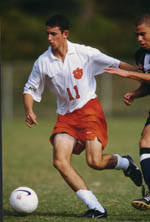 Lisi Drafted In First Round Of MLS Draft

Davie, FL–Mark Lisi was the third pick in the first round by DC United of the Major League Soccer draft being held Monday at the Signature Grand in Davie, FL.

The draft, where all twelve MLS clubs build for the future, select the best Project-40, college, A-League, and international players available.

Lisi, a native of Englewood, CO, was a senior for the Tigers in the 2000 season. He led Clemson with 15 goals and eight assists for 38 points as a senior. He earned a place on the NSCAA Division I First Team All-American list. He was also a member of the All-ACC First Team in 1998, 1999, and 2000.

Lisi finished a stellar four-year career at Clemson with 43 goals, 37 assists and 103 points.