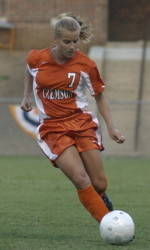 CLEMSON, SC – Former Tiger women’s soccer star Lindsay Browne was recently drafted by the Los Angeles Sol in the fifth round of the 2010 Women’s Professional Soccer Draft. The forward was the 47th overall pick in the draft. The Sol was the WPS regular season champions in 2009, the league’s inaugural year.

Browne was a four-year starter at Clemson in 2000, 2001, 2002 and 2004. She was named Soccer America’s National Freshman of the Year and the ACC Rookie of the Year in 2000 and was a two-time All-ACC First Team selection. She ranks third in Clemson career record books in points (102) and assists (34), and is sixth in program history in career goals (34.)

In addition to Browne, three other former Tigers are currently listed on WPS rosters. All-American goalkeeper Ashley Phillips is a member of the Boston Breakers, midfielder Lydia Vandenbergh plays for the Chicago Red Stars and defender Lindsay Massengale is on the roster for the FC Gold Pride (Bay Area.)