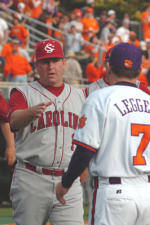 The Clemson Athletic Ticket Office announced Thursday that a limited number of reserved seats for the April 12 baseball game against South Carolina at Doug Kingsmore Stadium will go on sale on Friday, March 17.

It was announced previously that reserved seats in the TigerZone (covered area directly on each side of the press box) were available for $15 to IPTAY donors only. However, those seats have sold out.

The game against the Gamecocks has been designated as a One Clemson…Solid Orange Event. A portion of the proceeds from the event will be used for specific One Clemson academic efforts. One Clemson recognizes the strength and unity in everything the University does. The One Clemson Fund supports the University’s academic goals that will further enhance the ability of Clemson University to make for a stronger South Carolina and nation.