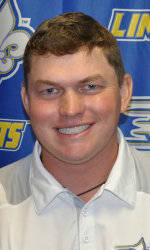 GAFFNEY, SC – Vice President for Intercollegiate Athletics Mike Cerino and Limestone College have announced that golf professional and former Clemson University golfer Nick Biershenk has been hired as head coach of both the men’s and women’s golf programs.

“We are excited to have someone like Nick Biershenk heading up our golf programs” said Cerino. “He has a tremendous background in the game of golf and we are looking forward to his bringing both our programs back to the high level of play that we are accustomed to”.

A native of Boiling Springs, S.C., Biershenk brings a tremendous amount of experience and credibility to the Saints’ golf programs. A member of Clemson University’s golf team, Biershenk was part of the 2003 NCAA Division I National Champions and played for legendary Tigers coach Larry Penley.

Since his collegiate playing career, he has crafted a successful professional career, claiming the championship of the Skyview Open and six victories on the Carolinas Mountain Tour. He has also earned three Top-5 finishes in three starts on the Carolinas Pro Golf Tour. In those events, he has not posted a single round over par.

On the amateur circuit, he finished as the 2002 South Carolina Amateur Match Play Champion and was the runner-up in 2004. He is also a two-time Spartanburg County Amateur Champion.

In addition to all of his accomplishments, Biershenk comes from a strong golfing family. His brother Tommy is currently playing on the Nationwide Tour and has crafted an impressive career since turning pro in 1997, while his other brother Robbie was a contestant on the most recent Golf Channel reality show “Big Break.” Robbie is also a five-time World Long Drive finalist.

“I would like to thank both President Griffin and Vice President for Intercollegiate Athletics Mike Cerino for giving me the opportunity to have my dream job” said Biershenk. “I am proud to be the head golf coach at Limestone College and I look forward to bringing my knowledge and experience to the golf program and leading the teams to many championships”.

Biershenk graduated from Clemson University in 2007 with a degree in Sport Management.

What They’re Saying About Nick BiershenkLarry Penley, Head Men’s Golf Coach, Clemson University “It’s a fantastic hire for Limestone. I think he’s going to do a great job there. He is very patient and knows the game. Nick is also very familiar with the talent in the Upstate of South Carolina and has the connections to pull in strong recruits. I look forward to seeing him get Limestone back to a championship level like when they were winning NAIA Championships in the 1980’s.”

Vic Lipscomb, Head Men’s Golf Coach, Wofford College “I’ve known the Biershenk family for a very long time and Nick is a young man that knows what it takes to be a good golfer. Through his experiences at Clemson, he has seen what it takes to be a good coach and do things in a first class way. He comes from a golfing family and knows the region so should be a very good recruiter. Nick is a hard worker and he’ll do a great job”.

Randy Hines, Limestone National Champion, Hall of Fame Golfer and Coach “Having been associated with Limestone College golf since 1977, I take great pride in being a key part of that program’s championship tradition. I have complete confidence that Nick Biershenk will build from the strong base that exists and return the program to national prominence.”