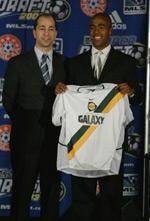 Lewis Honored as Strength All American

Clemson men’s soccer player, Ricky Lewis was named to the National Strength and Conditioning Association (NSCA) All-America team as announced by the NSCA. To be named as an NSCA All-American, an athlete must show achievement in the development of improved athletic performance through total conditioning.

Lewis was the 20th pick overall by the Los Angeles Galaxy in the MLS draft this past January. Lewis came out after his junior season as he had four goals and six assists in 2002.